Why you should know me: Vladimir Demchenko, founder of the Dynamics manual therapy clinic 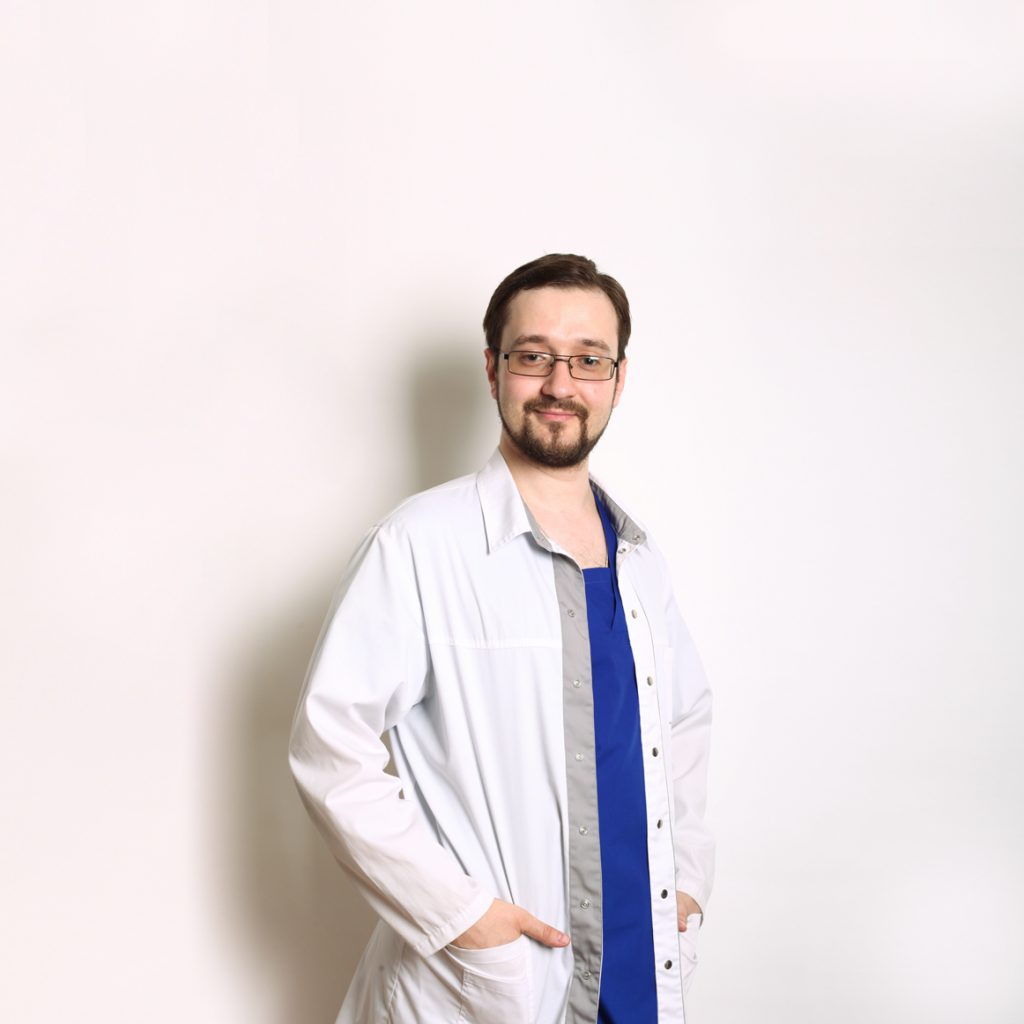 And at that moment I was the winner of the Moscow Olympiad in biology, I took the second place in Russia. “We are going to the Second Medical School, where pediatrics is strong,” said the father. He needed a neurologist, so I became a pediatric neurologist. And then I realized that I didn’t want to be a neurologist, I ended up in the Russian Children’s Clinical Hospital, it was very hard work (we buried forty children for my residency). In general, neurology is a special topic, especially for children. Firstly, you are dealing with parents, not children, and secondly, there are problems in children’s neurology – kick-ass and bullshit. Garbage does not need to be treated, pipets is not treated. And I thought that I need something more adequate, where I feel the result. And since I was already involved in sports and moonlighting as a sports masseur, I realized that as a massage therapist I can do much more than as a neurologist.

Listen, you touch my leg and immediately determine the place of pain. Is this something “mystical” for you?

No, it’s not a mystical thing, it’s a palpation. When I was an osteopathic student, we had finger sensitivity tests done on first-year students, final-year students, and doctors, and it turned out that the sensitivity was five times higher in practitioners and twice as high in students as in applicants. And it’s a learned skill, like sniffing. Just the density in the cerebral cortex in the hand receptor area, because you use it all the time.

Well, all the same, there must be some talents, “insights” for such work …

I came so wooden, you have no idea, first to massage, then to osteopathy. This is a palpatory skill, and plus we see what we know in medicine. That is, if we feel the same leg, we can feel a lot of things, it’s another matter that there is no focus on this. If you have already seen it many times, felt it many times, then such a thing is being developed, you can make a chiropractor, an osteopath out of any person, if there is a desire.

You have become a famous doctor in Moscow, despite your relative youth. You restore a person after injuries, you practice medicine for health, and not for the sick, if I may say so, that is, a healthy person comes and he just needs to be corrected a little – functional medicine. You come to the clinic to see you: a cozy atmosphere, no queues, the doctor does not communicate with you like a doctor … For me, this is new medicine, as in Europe, in Moscow I don’t even see this in private clinics.

You are absolutely right about Europe, because everything I learned was in Europe or in America. I very little use the knowledge that I received in residency here …

And what, we have bad medicine?

No, let’s do it this way: it is divided into parts, we have super-cool dentistry, the whole of Europe goes here, we have good surgery, cardiology. And there are undeveloped areas, that’s what I do here, in Europe, in America, not doctors do, they have a physical therapist, a person who has a separate education, he is akin to average staff in America. Such a specialist does not have the right to make a diagnosis.

In America, the first step is to send you to a physical therapist, since an MRI is expensive, then you have ten appointments with a physical therapist, if you have recovered, thank God, if not, then you already get to a neurosurgeon. This is a functional period for us, that is, when the anatomy is good, nothing has broken off, there are no tumors, something just does not work well, and our task is to find why the function has gone astray and fix it. That is, their physical therapist has the right to prescribe only ibuprofen, and the doctor is some kind of celestial, conditionally: you live, you don’t live.

Here, it seems strange, is the high-quality insurance model of America’s medicine, but it turns out that all these protocol stories have their minus.

Yes, but I didn’t do my internship for long in Israel, and there are protocols! And what is the advantage of protocols? The protocol prevents a fool from making a mistake, because it works so well that the average hospital will be better. That is, there is work on the absence of errors, and not on creative solutions. If we take mass history, it’s better. For example, a friend of mine in Russia missed cancer, and if the studies were done in Israel, they would not have missed him there, because so many studies would have been assigned and they would have found him in a wide range. All these protocols are designed to avoid mistakes, and sometimes it is better not to make a mistake in a hundred people than to cure one person with a creative approach. In order to break the protocol, they had to gather three doctors, one of them must have a degree, and only in this case the three of them could break the protocol.

Why is traumatology in Russia not as developed as cardiology, for example, in the USSR there was a lot of sports?

Because we took a different path, there was a rejection of world experience, we had our own developments in rehabilitation, and during the Union it was simply impossible, but when perestroika came and it became possible, we stumbled upon one interesting thing: our medical departments are not very they wanted to integrate with world experience, they simply did not know English.

Yes, imagine! Because rehabilitologists, physical therapists have world associations, you pay some kind of fee, you conduct and attend courses. And you are in the subject.

And Russia had such an attempt, there was, for example, the chief therapist in Moscow – Sitl, he entered the international association for manual therapy, but he was expelled because he did not pay deductions.
If you look at everything that I do, this is such a set of schools from all over the world, I went through almost all international conferences, got certified in various medical concepts. My hobby is to study and teach, that’s how I work! When your whole life revolves around this, when you acquire new knowledge, then you have something to digest and return to patients with new solutions.

People in Russia don’t like the rich. In Russia, many believe that medicine should be free. How do you determine the pricing policy in your clinic?

If you do not take into account that I am a little known in professional circles, then my price is 5500 per appointment, which is quite average for the market, ours is even lower than the market. Because I decided that I would include everything in the bill for the emotional peace of the doctor and the patient. Because when you think that you need to sell a service, and the patient thinks whether it is necessary or not to buy, then this is bullshit. In general, I dreamed of opening something where everything would be fine. And this idea with the fact that “all inclusive” is for the sake of the psychological comfort of everyone. I understand that if I put a price tag of 15 thousand rubles, they will also come to me, but I decided to stop, now I have one of the goals – not to fly into the VIP segment, to treat only rich people, but still work with everyone people.
Again, I really do not like to lose, and if I see that I can hardly help a person, I send him to a traumatologist or another specialist.

But what about without losing? After all, on such stories a person learns and learns new things?

I have them, but due to forecasting, such cases have become much less. But if the anatomy has suffered greatly, these are not our patients.

There is something strange about this.

Each doctor is for his own cases, I help people who are injured during sports activities or just on the street. I save you from pain and inconvenience …

When did you feel your fame?

In principle, I was well known in sports circles and very well known in professional circles. I worked at CSKA in a hockey club as a rehabilitation doctor, I made good progress from there. But it was fame that started when I started lecturing in “I love super sport”. And somehow a guy came up to me and said that he has a school for videos, I have my own YouTube channel, let’s shoot and upload it to your channel.
I say: “I don’t have a YouTube channel.” Well, he made me a YouTube channel, and then I decided to google my lecture, and my channel is given to me and there are 120 thousand subscribers. It turned out that these tips are useful to people.

My task is to reduce injuries, or, if something already hurts, “fix” it yourself at home. My channel consists of practical advice. Recently celebrated a million subscribers, ordered a golden button.

All the possibilities to become a millionaire doctor, like in America.

Does that make sense?

Once a woman came with her mother, her mother’s hand almost does not rise, they say something, and I look and see that her anterior head of the shoulder is in subluxation. I hop this head like that – and I say: “Raise your hand.”
She raises her hand for the first time in 20 years. On the one hand, this is a miracle, cool, for the sake of such things you want to live!

And there was another story, an old woman came to me with a sore back. I worked with her and I say: “You don’t need money, keep it for yourself.”

Two weeks pass, she comes to me, puts an envelope on the table, and there are 200 thousand rubles: “This is for you to develop your business.” Grandmother turned out to be the daughter of Agnia Barto, she has the rights to all her publications. She comes to me once every two weeks, improves her health, she plays table tennis with her great-grandchildren, like that!

Photo: from the personal archive of Vladimir Demchenko

Eyewitnesses of deadly accident are being sought in Sapozhka