Why you should know me: Ivan Musinov, founder of the Cult of Roofs project 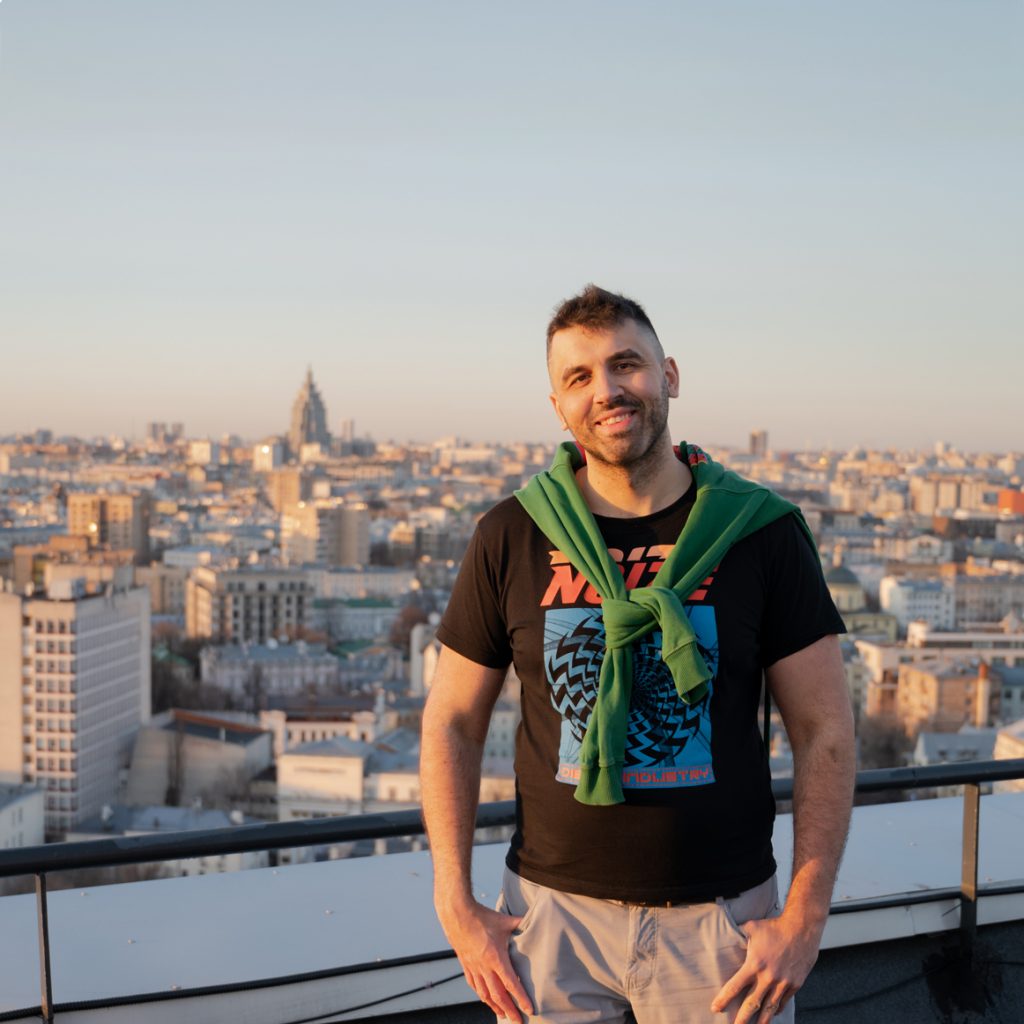 I was born in Perm, a large industrial center in the Urals. I remember my hometown with warmth, I understand how beautiful and charismatic it is in its own way, I miss the Permian winter with a normal amount of snow, there is not much of it in Moscow.

However, as far as I can remember, I always wanted to live in a metropolis. I was attracted by the atmosphere and aesthetics of big cities. To be honest, as a child, I had no clear idea of ​​​​what I want to become when I grow up. I only remember that there was a craving for everything constructive and creative: to build, draw, collect.

I studied at a modest university in Perm as an economist, and moved to Moscow during my studies. True, with the intention of building a career as a fitness instructor. I then became interested in powerlifting, the sport occupied all my thoughts. In Moscow, he quickly changed his profession as a coach to a journalist, wrote about electronics and gadgets. Well, having entered the magistracy of the National Research University Higher School of Economics in journalism, he quickly said goodbye to this profession. In general, the career path went on a whim – I just looked for what I like, tried different things, discarded a lot.

By the way, while working as a journalist, I became interested in photography – this hobby led me to the rooftops. However, the first “tops” were still in Perm. There was a cool place there – the roof of an abandoned military school, which was located on the banks of the Kama. Local creative (and not so) youth hung out here. I still have memories of that roof – a cool view of the mighty river and an incomparable feeling of freedom.

As for photography, I somehow immediately realized that I wanted to photograph urban landscapes, all this urban beauty. Moscow attracted me with its eclecticism, monumentality and scale. However, shooting here is not so easy – you want to photograph the landscape, but something “climbs” into the frame all the time – people, road signs, cars … Roofs became the way out, it was the beginning of 2010 in the yard, every second photographer did not have copters , and the shots from above were interesting in and of themselves.

I got on my first roof in Moscow by accident. I remember that I was sent to the accounting department for work, and it was in one of the diplomatic buildings near the Oktyabrskaya metro station. The right person went away somewhere, I decided to wander around the building. I found that the door to the attic was not locked, got up, and a stunning view opened up in front of me – a monument to Lenin and Moscow City behind it. Since then, it’s gone!

I began to explore the city’s rooftops with a camera, looking for any opportunity to take pictures of the capital from above. If the roof was closed, and I really wanted to get there, I looked for all kinds of workarounds: I tried to squeeze between the bars of the bars, climb the building along the shaky external stairs. At the same time, I tried to make my hobby as less destructive as possible for others. However, the consequences of illegal adventures on the roofs were still there. I remember once I climbed into the Moscow City construction site with my girlfriend, and on the descent the builders noticed us and started chasing us on a concrete mixer.

Among the guys who climbed the roofs in those years, there was a kind of challenge – it was considered cool to get on the roof, where no one could get before you. I have one of these roofs was the Ministry of Foreign Affairs. In 2014, by the way, we managed to take a photo of the spire of the Ministry of Foreign Affairs, which showed that it clearly needed reconstruction. She was held after a couple of years.

He posted his pictures on social networks, they began to gain a lot of likes. People asked to see Moscow from a bird’s eye view, so the idea came up to conduct excursions to skyscrapers. It was 2018, the World Cup, and the spirit of friendship was in the air. By some miracle, we managed to find a penthouse, the owner of which allowed access to the roof, after which other objects were already connected. From that moment on, the general concept of the project was formed – to show Moscow from above and talk about its history, architecture and culture.

I started working with a partner, but after a couple of years of working together, our paths diverged. Although we are still grateful to each other for this experience and maintain a cool relationship. In 2020, I actually had to start my business from scratch, now it has grown significantly, new locations and formats have appeared.

It’s great that the project has become interesting not only for young people, I really like to talk about the fact that grandparents visit us. Moreover, they attend quite youth formats. For example, Dawn Mania is one of the most atmospheric excursions. We go up to the roof of a 40-story skyscraper and meet the dawn there, and as a bonus, our photographer takes pictures of guests. Imagine: an almost deserted metropolis, an endless sky, a haze enveloping the city. We take pictures, drink tea, talk on interesting topics. I myself often attend this excursion and saw a huge number of sunrises. Once we met the dawn and got into low cloud cover, clouds floated under us, Moscow State University and Moscow City loomed on the horizon. I love watching people’s faces when they see something like this, it’s a feeling that can’t be put into words.

Often among the guests there are couples in love, young people propose to their chosen ones. Once we even held a wedding on the roof. However, now we have moved away from private events and focused on a wider audience.

One of the most favorite formats is the lecture hall in the Kotelnicheskaya skyscraper. We rent one of the apartments as an office for our project and arrange lectures there. Yes, this is not a roof, but the lecture hall is located high up and the views are amazing. Plus, the atmosphere of the Stalinist skyscraper plays a role. Themes are different: architecture, art, design. Morning lectures are accompanied by breakfasts for guests, we treat them to cheesecakes and Italian pizza.

We take thrill-seekers to the roof of the Luzhniki Grand Sports Arena. The sports complex here itself provides safety equipment, and taking pictures in a helmet and with carbines is one of the favorite moments of the tour.

What else? We also hold jazz and rock concerts at various venues, for example, on the roof of the Omega Rooftop on Tsvetnoy Boulevard, these events gathered 200–300 people each.

One of the most popular programs is a guided tour dedicated to the work of the architect Fyodor Osipovich Shekhtel (one of the outstanding masters of the Russian modern architectural style). First, we walk along the streets of Moscow. At the corner of Malaya Nikitskaya and Spiridonovka, we look at the famous mansion of the entrepreneur Stepan Ryabushinsky, on Tverskoy Boulevard we study the architecture of the house of the merchant Pyotr Smirnov, and in Trekhprudny Lane, Levenson’s press is waiting for us. We also get acquainted with the architect’s own houses in Ermolaevsky Lane and on Bolshaya Sadovaya. The tour itself ends on the roof of the business center on the Garden Ring.

Significant events include a photo tour of the Krasny Oktyabr factory. There you can walk between the buildings, go to the chocolate and candy shops and look at the roof. From here you have amazing views. In the distance one can see the snow-white Cathedral of Christ the Savior, the City, the carved Patriarchal Bridge, the Ostankino and Shukhov TV towers.

We also have an excursion to the Stalin skyscraper on Kudrinskaya Square. Imagine, you enter the entrance, and there is a marble floor, there are stained-glass windows in the windows on the first floor, columns and bas-reliefs in the lobby. At the end of the tour, we will go to one of the apartments with historical details and a cool view of the city.

In the future, we plan to look for more new venues, there are still plans to hold charity lectures, the funds from which will be used to support interesting architectural projects. I say “we” all the time. We are the team of the Cult of Roofs project, today it has rallied many active and talented people who admire the history and architecture of Moscow and want to share their discoveries and knowledge with others.

Photo: from the personal archive of Ivan Musinov

House of the week: dormitory for cotton factory workers in Rostokino

In Mytishchi’s O’Key store, carts and baskets were lined with portraits of Western leaders