Ukraine can go from a candidate to an EU member in a year or two: the main statements of the authorities on June 20

On average, the path from candidacy to full EU membership takes 4.5 years In Ukraine, the 117th day of a full-scale war with Russia. The Russian invaders continue to advance in the Donbas, but suffer losses, Germany began to launch coal-fired power plantsand Ukraine is preparing for candidacy for EU membership.

The site “Segodnya” has collected the main statements of the Ukrainian authorities for June 20.

President Volodymyr Zelensky appealed to the citizens on the night of June 20 and said that a historic week begins in Ukraine.

“The week when we hear the answer from the European Union on the status of the candidacy for Ukraine. There is already a positive decision of the European Commission, and at the end of the new week there will be a response from the European Council. I think it is obvious to everyone that since 1991 there have been few such fateful decisions for Ukraine , as we expect now. And I am sure that only a positive solution is in the interests of the whole of Europe”Zelensky said.

The President also noted that one should expect an increase in hostile activity from Russia.

“Exactly this week. And not only against Ukraine, but also against other European countries. We are preparing. We are ready. We are warning our partners.”– said the Ukrainian leader.

The head of state said that the invaders are building up forces in the Kharkiv direction and in the Zaporozhye region. Super-violent fighting continues in the Donbass.

“The Russian army uses the most artillery there, the most offensive forces. But Severodonetsk, Lisichansk, Avdeevka, Krasnogorovka and other hot spots are holding out. We have such people – holding on. Our army is holding on. And I am grateful to everyone whose strength today is our victory tomorrow”Zelensky summed up.

The “energy needle” must be knocked out of Russia’s hands. This was stated Head of the Office of the President of Ukraine Andriy Yermak in his Telegram channel.

Yermak noted that Germany has begun to launch coal-fired power plants, and Italy is preparing to announce a protocol of high alert due to the reduction in Russian gas supplies.

“For Russia, gas is a weapon that it is already using against Europe. A quick response is needed. The McFaul-Yermak group is proposing to our allies to impose a gas embargo to hit the Russian economy, as well as knock the “energy needle” out of their hands.– wrote the head of the Office of the President. 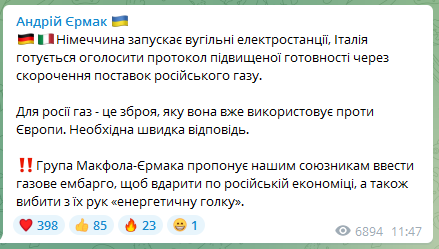 The Kremlin left the club of civilized countries

The Kremlin itself left the club of civilized countries after Russia became a state sponsoring terrorism. This was stated Advisor to the Head of the President’s Office Mykhailo Podolyak in his Twitter.

“It is important to fix legally: Russia is a country that sponsors terrorism. Trade with Russia should be equal to supporting terrorism with corresponding consequences. The Kremlin itself left the club of civilized countries. It is time for Russia to officially join like-minded people – Syria, Iran, North Korea. The decision is up to the US Senate “– wrote Podolyak.

Head of the Verkhovna Rada Committee on Foreign Policy Oleksandr Merezhko (the Servant of the People faction) considers it realistic that Ukraine will go from a candidate for a member of the European Union “in a year or two.” He stated this at an online briefing on Monday, June 20.

People’s Deputy noted that on average the path from candidacy to full membership in the EU lasts 4.5 years.

“We can do it with the support of our friends in the European Union much faster. I would like it to happen in a year or two. Maybe I’m an optimist”Merezhko said.

According to him, a lot depends on Ukraine, on its steps towards reforms, but there are also certain objective issues that the West pays attention to, – “We are talking about our victory over the aggressor state Russia“. Alexander Merezhko: “We can do it much faster with the support of our friends in the EU” / Photo: Press Service of the Servant of the People Party

In the Donbas, the Russian Federation strikes with aircraft, but the Armed Forces of Ukraine smash the occupiers

The Russian occupiers have committed shelling near the village of Seredina-Buda, Sumy region. Also, the enemy intensively uses aviation. In addition, the invaders continue to fight for establishing full control over the city of Severodonetsk. About it reported at the General Staff of the Armed Forces of Ukraine.

“In the Seversk direction, the enemy continues to hold up to three battalion tactical groups from the 1st Tank Army of the Western Military District and a unit of airborne troops to cover the section of the Russian-Ukrainian border in the Bryansk and Kursk regions. In the Bryansk region, the enemy has deployed an anti-aircraft missile division S-300V4 air defense system.In addition, the Russian aggressor fired artillery near the village of Seredina-Buda, Sumy region.”the message says.

TV presenter Oleksiy Burlakov told more about the situation at the front for the channel “Ukraine 4.5.0.”:

Since the beginning of the invasion of Ukraine, the Russian invaders have already lost 33,800 soldiers and 1,477 tanks. This was reported press office Ministry of Defense of Ukraine.

The total combat losses of the enemy from 24.02 to 20.06 approximately amounted to:

The greatest losses of the enemy over the past day were observed in the Bakhmut and Zaporozhye directions of the front. 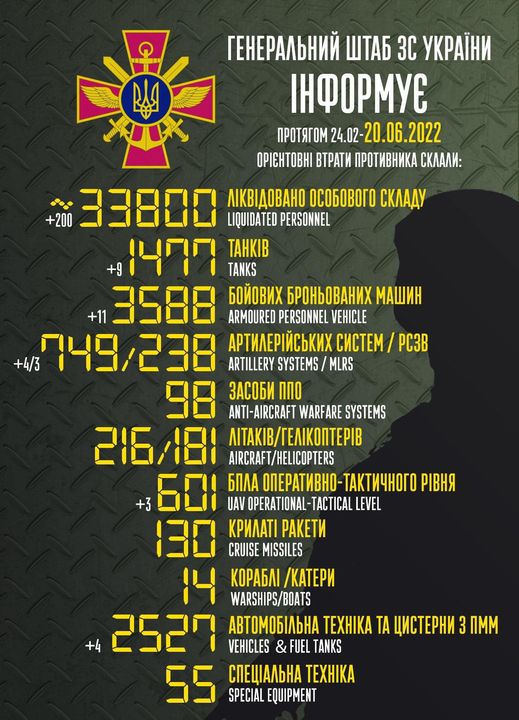 Earlier, the site “Today” reported that in the south of the Ukrainian military carried out rocket attacks on warehouses with fuel and areas of concentration of equipment of Russian invaders.

We also informed that the Russian special services began to actively buy abroad satellite images of Ukraine through shell companies. They are interested in both the front line and civilian infrastructure.

Murmansk minibus had an accident [видео]