The storm took the roof of the mill, which had previously burned down. The locals are talking about a tornado 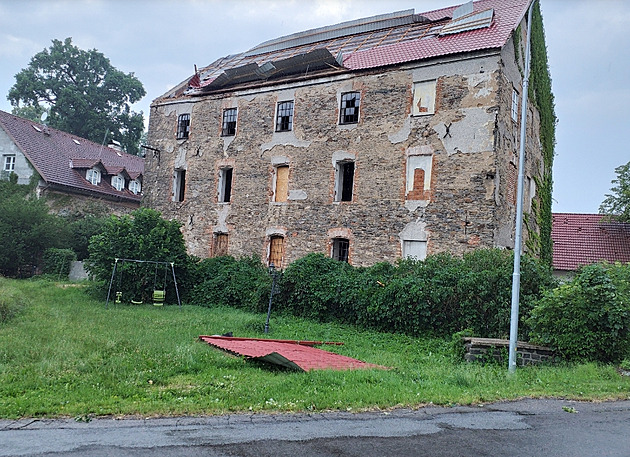 “We have counted 200 events in the last twelve hours. It was mainly about removing torn roofs, fallen trees and torn power lines, “said Vendula Horáková, a spokeswoman for the regional fire brigade.

The storm, which reached the Pardubice region around five o’clock in the afternoon, raged intensively in Ronov nad Doubravou. The roof of the Mladotice mill was brought by the wind to the surrounding trees, which are now very damaged.

“The locals said they saw the tornado, but it was probably a downburst,” says Marcel Lesák, mayor of Ronov nad Doubravou.

Downburst is characterized by “spilling” into the environment, so it can be confused with a tornado. Unlike a tornado, it is a short-term affair, lasting five to ten minutes, accompanied by heavy rainfall and hail. A series of downbursts can also occur during a storm, so an intermittent damage belt can measure several kilometers.

“The wind was blowing so hard that when I came out I had to hold on so it wouldn’t blow me away,” describes the terrifying situation of the mill owner Eva Joachimová.

“The local mill is unlucky because the area was on fire a few years ago, and now this,” Mayor Lesak added.

Nine fire brigades set out to remove the fallen roof. Part of the roof had to be nailed by firefighters to prevent another fall.

In Ronov, the storm damaged a few more roofs and one outdoor kitchen, where the owner was located, which fortunately nothing happened.

The hailstones were inches in diameter

However, the storm did not end its rampage in Ronov. In the adjacent village of Žlebská Lhotka, three houses took it away, where the wind also took a few tiles and a piece of roof.

“I was just in the shower when it came. It was shaking the whole house, and when I went out, everything was flying around. As if it were a tornado, “says the owner of the local boarding house Libor Hamsa.

Another short time-lapse video (timelapse) of this HP supercell from a drone. Unfortunately, I didn’t have time for a long time due to taking still pictures and a lot of time pressure to throw things in the car and disappear 🙂 https://t.co/uS3m4fBjMb

They have a similar experience in the village of Nákle near Heřmanov Městec. “The tornado took our roof off the hall. A lot of grits fell on that, “says company employee Pavel Řezníček. “The wind came, then the hail, it was not visible to the meter. We stood under the roof next door. The hail was thrashing in such a way that we didn’t even hear, then suddenly it stopped, the wind was spinning and we saw that there was no roof in the hall, “he describes the situation.

The editor of MF DNES has a similar experience. She was just entering Heřman’s Town and had to stop because she could not be seen in front of the hood from minute to minute.

“I stopped the car, unfortunately directly under a tree, so I had to park in confusing situations, as well as other cars. Then a huge wind blew in, and hailstones the size of a small hawk added, followed by heavy rain. After five minutes, the situation improved. There were branches and traffic signs along the main road and I also saw a couple of roof tiles on the sidewalks, “described MF DNES reporter Kateřina Koubová.

Cemeteries are closed in Chrudim

The damage also adds up in the district town of Chrudim. Trees were falling there, the electricity in the part of the city was still not working in the morning.

“At the moment, the urn grove and the U Kříže cemetery are closed. Disposal of trees takes several days, they must be carefully cut and removed so that nothing else is damaged. Michalský Park is also closed, I assume that everything will be cut and cleaned in the afternoon, “said Mayor František Pilný (YES).

Zdenk Justo: Today is a long place to live in the world

In Sri Lanka, mistakes were made. People ask for passports and want to go