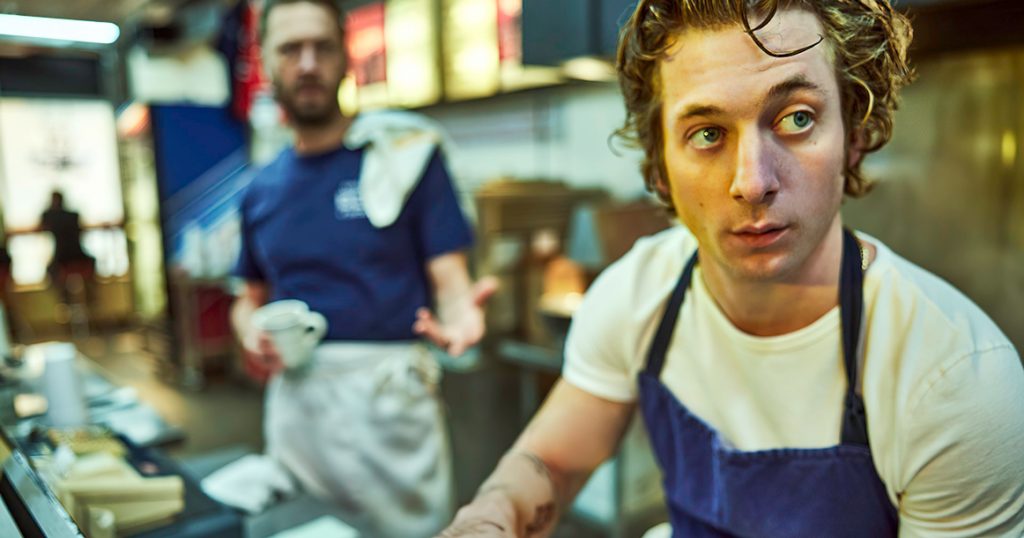 Chefs, following doctors, become heroes of our time: in just a year, the sensational “Boiling Point” was first released, and then “Julia”. Now it’s time for the FX sitcom The Bear.

After a brief interlude in which a live bear comes out of a cage on a confused, shaggy young man (Jeremy Allen White), the hero wakes up and turns out to be Carmi Berzatto (all bear analogies are connected precisely with the surname), a former chef of Michelin restaurants in New York, and now owner of the Chicago diner The Original Beef of Chicagoland. He got it not from a good life, but as a result of a tragedy: Mika’s brother (the episodic appearance of John Bernthal) committed suicide, bequeathing the business to Carmi, whom he did not even allow into the kitchen during his lifetime. Driven by family duty, Berzatto enthusiastically joins the business, determined to turn the eatery into a top restaurant. There are no prerequisites for this, to put it mildly: the kitchen is a mess, Cousin Richie (Ebon Moss-Bachrach) deliberately interferes with development, the menu is mediocre. Carefully ignoring the nightmares and self-doubt, Carmi hires sous chef Sidney (Ayo Edebiri) and has the employees address each other as “chef”.

The first episodes of the series look very uncomfortable. There are no expositions here, you have to delve into the action literally on the fly – a guarantee of this is the installation, torn between several central characters. The rhythm is set by an insane close-up strobe, a dynamic camera and sudden blackouts in the editing transitions, completely Balaban in spirit. It’s a gift that, in principle, “Bear” could well be called both “Brother” and “Brother 2”. The lack of ceremony with the audience here may even seem insulting, but turning off the series means abandoning one of the most striking and original shows of recent years.

Showrunner Christopher Storer previously worked on the multi-episode dramedy Rami about an Egyptian immigrant in New Jersey. “Bear” in a sense inherits this series, in the same way catching the hero in a situation of fundamental discomfort. Rami tried not to give up the principles inherited by birth, Karmi is looking for a compromise between professional experience and the inertia of family customs. Obviously, this is an intrigue that can be the basis for any genre scheme. In the “Bear” there is a melodrama, and a family drama, and a comedy of the absurd, and shooting, and even one murder. At some point, the viewer may notice that on the walls of the cafe there are posters of “Groundhog Day” and “Marked for Death” with Steven Seagal – this is approximately the range of the series.

The hectic rhythm runs the risk of breaking into pure chaos, but suddenly – an unexpected long shot or a series shot in real time. “Bear” is not hiding behind a machine gun mount, it is extremely well thought out. The biography of “jazzman chef” Charlie Trotter is here as not so much a basis as inspiration for the plot, and Jeremy Allen White worked in the kitchens of several restaurants for a couple of weeks. The combination of external negligence and real attention to detail allows The Bear to at some point turn into a living story, where even those who feel sick at the sight of pots and aprons recognize themselves. Separately, I would like to note that The Bear plays honestly: the first season is a finished story, but the second seems to be already in development. And this is really the restaurant you want to return to.

A lavish wedding! Jana Bobokov married her daughter in the Trojská zmák surrounded by luxury