The renovated church in Velvary has opened, it is a unique color painting 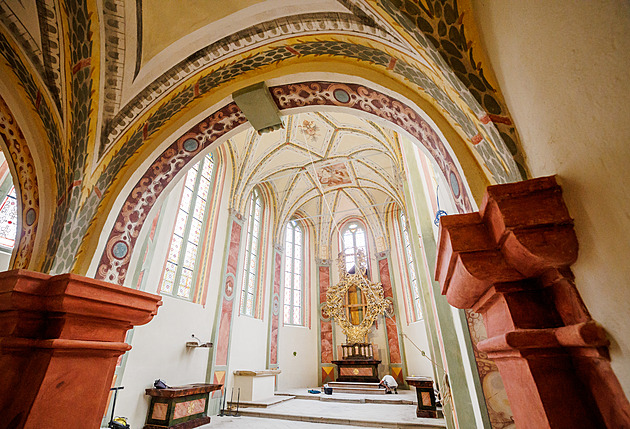 The church was no longer suitable for liturgical ceremonies, and it did not have the resources to repair it, so in 2011 the city bought it from it for a symbolic one crown. The reconstruction lasted ten long years and cost approximately 20 million crowns. The church was opened to the public again at the beginning of June as part of the Church Night event

Although the church is outside the monument zone, the city managed to succeed in the Ministry of Culture’s subsidy programs for the preservation of architectural heritage after the transfer of property. In recent years, the Central Bohemian Region has also become an important donor of repairs.

These resources covered about half of the reconstruction costs. The trusses and the roof as well as the facade, including all stone elements, have been completely repaired.

“It took almost three years to restore the beautiful ornamental stained glass windows and at the same time to uncover and repair the Renaissance paintings from 1616. These were discovered a hundred years ago. Our ancestors wanted to uncover them at the time, but it was not a good time and they lacked money. Everything was further complicated by the war years. Therefore, they remained covered and it was only now possible to restore them to their original beauty, ”says Velvar Mayor Radim Wolák.

Interior renovation was a complex process. The original paintings have been covered several times over the years. “These thin layers had to be removed. It was a lengthy job in which we used special hammers and scalpels, “described the procedure of Jiří Mšek, one of the restorers, who also took part in the restoration of the synagogue in Rakovník.

Uncovering the original painting meant a relatively big surprise for restorers and historians. “Their colors are not typical for churches in this region. We managed to renovate the ceiling frescoes depicting St. Jiří, the city emblem, as well as the emblems of the individual townspeople of Velvar, who took part in the construction of this tabernacle, “the mayor remarked.

The Velvar church used to be richly decorated with furniture in the past. However, with the gradual devastation of the church in the second half of the last century, it was partially damaged. In the wild 1990s, the temple was looted several times and many valuables were lost forever.

The filmmakers gave him the last blow. One of the final scenes of Dark Blue World was created here, in which prisoners sew clothes. At the same time, the remaining furniture was quite damaged.

“The equipment is still owned by the church, which has it stored in its depositories. So far, we are unsuccessfully negotiating its transfer to the ownership of the city and its return to the church. We care most about the part of the organ, which is said to be among the top ten in the country. All that is left of them in the church is an organ cabinet with bellows, “said Mayor Wolák.

There will be weddings and funerals

Although the work on the church is not yet complete, it remains to repair the floors and plaster in the sacristy so that the temple can live again.

“Already at the beginning of the month, the first wedding of the newlyweds from Velvar took place here. We are also planning other events. There will be exhibitions, concerts. We would also like to make the final farewell to the deceased here. The place is also suitable for various city ceremonies or the ceremonial elimination of primary school pupils, “Wolák described the plans.

We can predict the size of hail. But not the tornado, says the meteorologist

Germany has backed an EU embargo on Russian oil imports, and Hungary is against it

Samsung M53: Samsung has introduced the top model of the advantageous series. But the price doesn’t make sense