The most important players lacked top form, sorry for the coach from Budějovice

You won the Czech Cup and finished third in the extra league. Have you been able to evaluate the whole season?
I would divide it into two parts. The first was very good. It started with the European CEV Cup, where we unfortunately got the Russian team Kemerovo again. It is always difficult to go through them, there is great quality. We played even matches with them, but we did not advance. Then came the Czech Cup, where we gave a very good performance against both the Lions of Prague and against Karlovy Vary in the final. In such competition, winning is a huge success.

And the second part do you mean play off?
We played the first match with the Lions in the semifinals, but then the people of Prague were hit by soot, maybe they were hit by the defeated quarterfinals with Kladno, and since then they have played well. Exactly what, according to paper assumptions, they were supposed to show throughout the season. We didn’t show our best performance in the semifinals, we couldn’t get out of it somehow.

Could it have changed something?
Maybe it would be enough to play with one hundred luck and the whole series would break. On the other hand, I am glad that after this failure and a big disappointment for the whole team, we got together and managed to play third place. And that in the last match we played again the volleyball we showed in the season. Unfortunately, there were a number of factors that limited us and that we did not talk about during the playoffs.

Are you talking about injuries?
Yes, I can say that now. For example, Radek Mach had a bad shoulder for over a month after the cup final, then just before the elimination fights, he spent a week in a fever and under antibiotics. Ondřej Piskáček lay in the infection department with rotavirus for five days, lost several kilos of his weight, so he also lost his usual form. Michal Kriško also practically did not get well until the end of the season due to a severe ankle injury.

And that’s not all.
Casey Schouten has been working with the groin and pullers since the start of the playoffs and entered the semifinals with virtually no training after a ten-day break. In addition to all this, Filip Stojlovič sprained his ankle, so it added to us and the most busy people in the playoffs were the masseur, physiotherapist and doctors. It probably looks similar in every team during a long season, but it hit us at the wrong time and all of a sudden. But none of us will and we don’t want to make excuses, the end of the season was simply not ideal.

And so the season in general?
We can take the long-term part and winning the cup as a success. We did not succeed in three of the four matches in the semifinals with Prague, when the opponent was better. Our goal was the final, so we did not meet expectations and we can talk about failure. However, I am glad that we ended the season with a quality performance on the field and a victory, which is always good for the team. Perhaps we said goodbye so well to our great fans, who were a great support to us throughout the season.

In the post-match rankings in the semifinals, you often repeated that you had problems in the attack.
I’ve discussed it several times and I’m still analyzing it. It started at the reception, where Prague pushed us. We didn’t pass the way we would have imagined, even though we had better numbers than our opponent. But the Lions attacked the heavy balloons, we didn’t. Then the distribution of the recording certainly played a role in that, we have been used to better performances since Miguel de Amo for a long time. We statistically attacked a few percent, in that Prague surpassed us.

You know it as a player. How hard is it to time your form?
It’s difficult. Especially when you have more peaks in the high season. That was the Czech Cup, then we caught up with the first place in the long-term part. And in the playoffs, everything really has to come together, from health to physical training and mental settings. It’s good when you get a strong impulse, which Prague, for example. She managed a difficult quarterfinals and that kicked her. We may have been slightly satisfied with the success of the cup, although I can’t see the players’ heads. Even so, the biggest problem was that the most important players were not in top form. We still had to change something, look for something, which does not contribute to the well-being of the team in important matches.

There was a lot of talk about the generational change of team. What will the team look like next season?
It is certain that Captain Radek Mach will end. We are still working on changes in certain key positions, we should be smarter in the coming days. There will definitely be changes.

You talked about how the Lions made good use of the high smashers. Will it be the path that Jihostroj will take?
Maybe so, but they’re not much. Finding more than two-meter-old guys who can manage their income so that they stay on the field is a really different level. I think that our Martin Licek is just such a player and could handle this role. He is in his first year and I hope that his growth will be well seen next season. 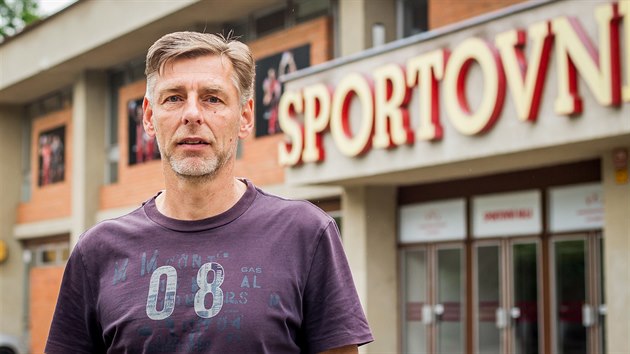 René Dvořák, coach of the Volleyball players in Budějovice

The era of Jihostroj, in which the blocker Radek Mach is saying goodbye, is coming to an end. He played nineteen seasons in one club, which is unprecedented today and any sport. What will the staff look like without him?
This is really a rarity. Today, players move from one club to another, pursuing better volleyball and earnings. That probably won’t happen again. Radek has not been here in number in recent years, but he has maintained a stable and excellent performance. This year, his injuries plus illness put him out for a long time, he couldn’t get to his level, which made me very sorry. We missed him terribly in important matches and his absence was really noticeable.

You will be with the team next season as the head coach. Do you already have a replacement for Mach as captain?
I still have a signed contract for a year. It’s too early for the captain, we’re just done now. There are two ways to choose a captain. Either the locker room does it or the coach. When I arrived, the captain of Hornbeam was already the captain, and when he left, the boys chose Radek and I had a slightly bigger advisory voice there. It was confirmed that it was definitely a very good choice.

The best insurance is your own property. An expert advises on how to protect your income

She was annoyed by gravity, she lost not only the folds on her belly in Dream Beauty

The outbreak of sick brains, the mayors criticize the possible disruption of building authorities

Police reform is bleaking, Rakuan is also a change in intelligence