The funeral of a Palestinian journalist was accompanied by riots. The casket fell to the ground 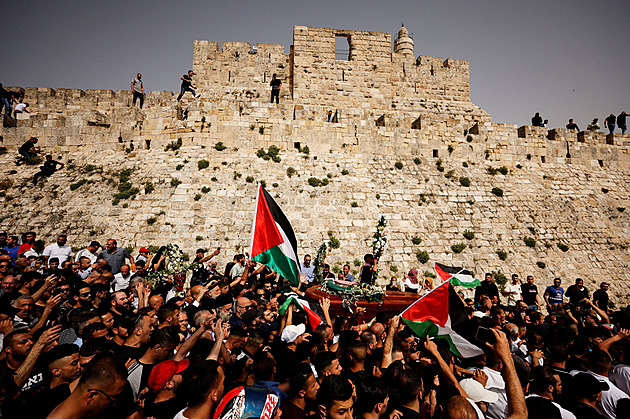 Dozens of people tried to transfer the coffin with the journalist’s body from a hospital to a church in Jerusalem’s Old City, many of them holding Palestinian flags. Israeli police intervened on the spot and clashes broke out, during which the coffin fell to the ground at one point.

Police later allowed the family to transport the coffin to the church by car. She subsequently closed the entrance to the hospital and used tear gas against the remaining protesters inside, the AP agency writes. “The Israeli army is asking people if they are Christians or Muslims. If you are a Muslim, they will not let you in, “the al-Jazeera reporter said on the spot.

According to Reuters, around the coffin at St. Joseph was oppressed by dozens of Palestinians. Israeli police apparently wanted to prevent people from carrying the coffin in a pedestrian procession, and some batons beat the coffin carriers and kicked them. The violent scenes, which lasted only a few minutes, contributed to the Palestinian outrage over the killing of the reporter, according to Reuters.

Israeli police said a group of Palestinian rioters in front of the hospital were throwing stones at police officers. “The police were forced to act,” he said. Crowds of Palestinians then accompanied the coffin in the narrow streets of the Old Town. The coffin was eventually brought to the cemetery on Mount Zion. The journalist’s grave was covered with wreaths and a Palestinian flag hung over the tomb cross.

The grave was surrounded by mourners and said solemnly to the deceased. “We are here because we are calling for justice. “Justice for Shirin Abu Aklah and justice for Palestine,” said one of the mourners.

Born in Jerusalem, 51-year-old Aklah began working for Al Jazeera in 1997. She regularly reported on Israel, the West Bank and the Gaza Strip, and was a familiar face to millions of Arab television viewers. She was hit in the head on Wednesday while she was working on a report on the Israeli raid in Janin. She was wearing a vest with the words Press visible.

Palestinian President Mahmoud Abbas told the mourners that the Israeli authorities were fully responsible for the death of the journalist and would refer the matter to the International Criminal Court (ICC). However, the Israeli army said on Friday that there was a heavy shooting about 200 meters from Aklah, and according to the first results of the investigation, it is not possible to determine who fired.

Israel has also previously called for a joint investigation. However, the Palestinian Authority refused, saying it would not release the bullet that killed the journalist for ballistic analysis. Journalists who were with Aklah, one of whom was shot, said there were no Palestinian militants at the time of the incident and no clashes.

Early in the morning, Israeli soldiers raided Janin again. An AP photographer heard heavy gunfire and explosions there and said that Israeli soldiers surrounded the house. The Palestinian Ministry of Health said that thirteen Palestinians ended up in hospital after being injured in the fighting, including one who was shot in the stomach. The Israeli army said Palestinians started firing when soldiers came to arrest the suspect.

Israeli security forces have recently carried out raids on Janin, which is considered one of the strongholds of Palestinian radicals, almost daily. Military operations in the Palestinian territories have intensified in connection with a series of anti-Israel attacks, in which nineteen people have been killed since the end of March.

According to the Palestinian Ministry of Health, Israeli forces have killed 30 Palestinians since the end of March. There are attackers among them, but also participants in the clashes and passers-by.

Concerns over violence by Israeli security forces on Friday were expressed by the UN or the United States. “We just saw a video of it and it’s just very shocking for us,” said UN spokesman Farhan Haq. He said the organization was now trying to get more information about the incident.

“Of course, as in all cases, we want to ensure that the fundamental rights to freedom of assembly and, of course, the right to free peaceful demonstrations are protected and respected,” Haq added. The US ambassador to the UN, Linda Thomas-Greenfield, said that the footage shook her deeply.

The European Union, through its representation in Palestine, has also expressed dismay at the use of “unnecessary force” by Israeli forces during the funeral. “Such inappropriate behavior only fuels tensions,” the EU said.

“The Israeli army is asking people if they are Christian or Muslim. If you’re Muslim you weren’t allowed in.” – @ajimran

esk branches etzce Iceland m insolvency. The reason is a pandemic and Brexit