Souvenirs, special tours and a summer cinema. Cities are fighting for tourists 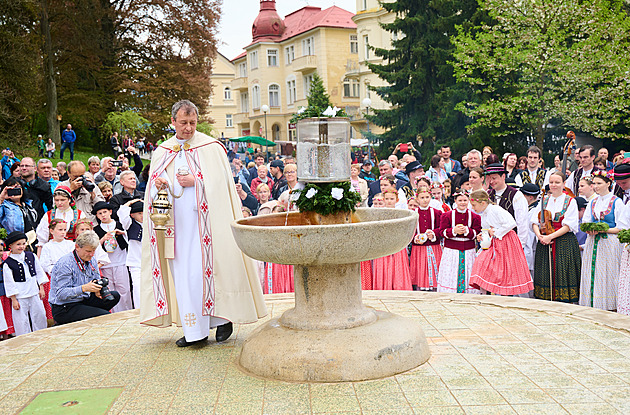 A year ago, they entered the season with embarrassment and uncertainty. The traditional opening event of the opening of the springs was only symbolic due to anti-epidemic measures. This year, the situation in Luhačovice is diametrically different. The weekend traditional parade filled the city with visitors and the prospects for the summer season are very optimistic.

“It can already be seen that the guests are heading for us in bulk,” confirmed the mayor of Luhačovice, Marian Ležák.

According to him, Luhačovice is now the most visited spa seat in the country. “We have the advantage that Czech and Slovak clients traditionally come to us. Unlike other spas, we did not lose foreign guests, “he pointed out.

This is crucial news for a spa town that is heavily dependent on tourism. Two covid years have significantly slowed down typical life in the city. “In recent years, we have always been a little desperate before the summer,” Ležák admitted. “Fortunately, the effects weren’t so devastating and no operations had to be disrupted or shut down.”

This year, tourism should kick in again. Therefore, Luhačovice and other cities are preparing an even more varied offer for guests than in the years before the covid.

“We have added a number of cultural events to make the social life in the city even more diverse,” said the mayor of Luhačovice. “We want to attract customers, for example, to the summer cinema, which will start in June and will have an increased number of performances.”

Other cities in the region are also attracted to a larger number of activities. Zlín has been reaching potential applicants since the beginning of spring through tourism fairs. In addition, this year he wants to take advantage of events and projects organized as part of the celebrations of the 700th anniversary of the first written mention.

“In addition, visitors are most interested in Zlín’s architecture, the Tomas Bata personality, the T. Bata Memorial, the Zlín Zone guide service and, last but not least, the zoo,” said Eva Manišová, head of the tourism department of the Zlín municipality.

Guided walks and new exhibits at the zoo

This year, the city has prepared a new route as part of guided walks that bring the local architecture closer. From May 18 to September 28, visitors can go there every Wednesday and Saturday. The new tour will introduce people to living in Baťa’s time.

“He will take them to the first working-class district of Letná, where Tomáš Baťa had the first houses built for his employees,” Manišová specified.

It is also a novelty that it will be possible to purchase gift vouchers for guided walks. New trails have also been added as part of the Zlín Architectural Manual. The new expositions at the Lešná zoo, where they present damanas, turtles and African birds, as well as the Jaguar Trek, which will show people jaguars returning to the garden after 25 years, will also be an attraction.

In addition, Zlín has prepared a new collection of souvenirs for this year. People will find bags, mugs, hats, books about local personalities, as well as collectibles, coffee, tea and plum brandy. This year, objects commemorating the city’s jubilee have also been added.

They also want to attract tourists in Uherské Hradiště. Before the pandemic, the number of visitors increased, but covid slowed down tourism. The city had it created this year new spot, which is to show that a holiday in Slovakia can be enjoyed in many ways.

“People from more distant corners of the republic often do not even know Uherské Hradiště, which for them is primarily a small town on the edge of the republic,” said Mayor Stanislav Blaha.

A roughly two-minute promotional video may reconsider this attitude. The spot brings the story of two lovers, which refers to local monuments, gastronomy, sailing in Moravia, sports and folklore and traditions. The video will be shown on social networks and will also be available to service providers.

The traditional destination for tourists is Rožnov pod Radhoštěm, where the town started the season in cooperation with the local open-air museum. Guests are attracted to large festivals and fairs, guided tours or a story game. The town hall also focuses on cycling, and lends bicycles, e-bikes and scooters to those interested in the local information center.

The center of Kroměříž will be enlivened by a relaxation zone

In the summer, Rožnov will also offer a number of cultural events, golf courses and a special summer exhibition of ice sculptures.

They want to target domestic visitors in Kroměříž. The town hall cooperates with the Administration of the Archbishop’s Castle and Gardens in order to promote mainly monuments inscribed on the prestigious UNESCO list. These also appear on several tourist routes called Kroměříž for their own, for which the city has printed maps describing individual places.

“In addition, we focus on the most important events that the city is preparing,” outlined the mayor of Kroměříž, Jaroslav Němec.

The first big event will be Color Run at the beginning of June, the city also attracts the event Gunners in Kroměříž with the participation of football legends, the Music in the Gardens and the Castle Festival or the International Wind Music Festival are planned.

“In the summer, the city center will be enlivened by a relaxation zone, which, in addition to sitting and relaxing, will also offer an interesting program,” said town hall spokesman Jan Vondrášek.

Both Fuksov, tykajaky and Dostl are in the finals at the World Championships in Poznan

esk boxing discovery Soquessa: Tyson used to be stupid, but he fainted

Veleto of the Brno expressor Vokl, he wants to go to the YES again until the elections

CONTEXT: A wave of refugees has taken a position in the labor market, I am a human resources manager