She can already see her husband. The Russians are capable of everything, says Zelenská 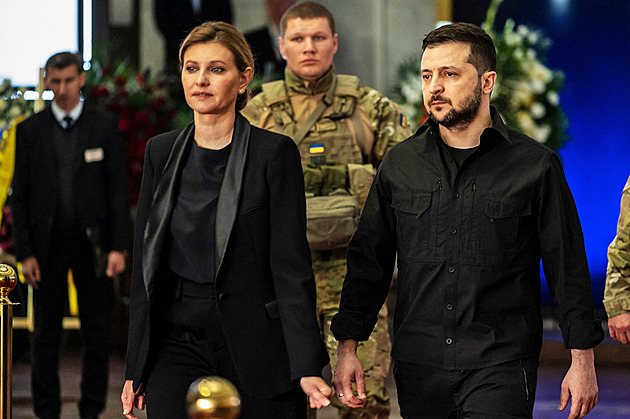 Early in the morning of February 24, when Russia launched an invasion of Ukraine, she heard a muffled blow in the distance somewhere in the distance. She opened her eyes and found that she was alone in bed. She jumped up and hurried to the next room, where she found her husband in a suit and tie. “What’s going on?” She asked. “It started,” he replied. “I had the feeling that I was in some parallel reality, that something seemed to me,” says Zelenská.

Her husband then went to the presidential campus to chair the security council, which decided on the first response to the invasion. The first lady went to check on her nine-year-old son Kyryl and her seventeen-year-old daughter Oleksandra. The children were already awake and seemed to understand what was happening. She started packing her suitcase. Whenever the rumble approached, she hurried to the cellar with the children.

In the evening, she met the man again and learned from him that he and the children would take her to a safe place. They hugged, but there was no time for tears or sentiment, he describes. Only later did she admit that she might never see him again.

In the early days of Russian aggression, there was a feeling that anything was possible, writes The Guardian. The missiles landed all over the country, with Russian troops advancing on Kiev from three directions. The Ukrainian president said that, according to intelligence information, the enemy had marked him as the number one target and his family the number two target. “When you see what horrible crimes they commit, you think that maybe they are really capable of everything,” Zelenská now said.

So while the president ignored the West’s proposals to leave Kyiv and form a government in western Ukraine or Poland, his wife and children went to relative safety. Where exactly, the first lady doesn’t want to divulge even now. But according to her, she moved regularly. At the same time, she insists that she stayed in Ukraine the whole time and that the children did not move away from her.

They didn’t have electronics with them, they didn’t connect to networks

“They were great. Usually you have to tell them things a million times, but that first day they did everything super fast and obediently … Then there was a long period of waiting. We watched the news, waiting for the phone calls. We had the TV on all the time, “describes Zelenská. “Yes, we had a television, I was not underground or underwater,” she responded to the journalist’s question.

Sometimes she managed to talk to her husband, although through no usual communication device, the diary warns. The security guards told her not to take any electronics or log on to any networks. According to her, the days were long; she wasted her time, for example, by helping her son with homework.

She appeared in public for the first time since the beginning of the Russian invasion, ten weeks later, when she met American First Lady Jill Biden in western Ukraine. Russian troops, meanwhile, withdrew from northern Ukraine in early April, and thanks to the calming of the situation in the area, they were able to return to the metropolis, at least for a while, writes The Guardian. At the same time, he does not want to reveal where he now lives. It is said that it is not with her husband, but at least they can see each other now.

“We hugged, greeted each other and asked each other how we were. There were children who pressed against him for a while. Now we can see each other and they can physically touch Dad, it’s a little easier, “he describes the reunion.

Compared to many Ukrainians, Zelenská has had a slightly easier situation in recent months, but the war has also taken its toll on her family, writes The Guardian. For example, the president’s son would like to meet friends. “I only played with dogs and bodyguards for three months,” he complained, according to his mother. At the same time, she points out: “Every Ukrainian is now under enormous psychological pressure. Half of our population is separated from the family, “he warns, adding that after the conflict will end, it will be necessary to develop a comprehensive program to put people in order in this regard.

Comeback from the realm of dreams, a remake of the first two episodes of Max Payne is about to take place

Two deadly snakes train with a hunter on the track to Beneov, traffic stopped

Trpišovský in Pilsen got an unnecessary corner. Bucha? Catastrophic intervention