Sex, cyanide, and aliens have affected sacred architecture in LA

The capital of cinema is nevertheless a fascinating example of mysterious geometric styles pointing to various motifs. Within the widespread religious tolerance that prevails in the United States, the term “sacred geometry” originated due to the architectural appearance of temples, churches, synagogues, and mosques, which use these mathematical principles to command respect and perfection. 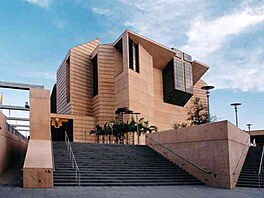 The Cathedral of Our Lady of the Angels is an impressive and unusual building in the city center that minimizes right angles.

Unlike Gothic or Baroque, modern architecture does not have a dominant identity. It is actually a combination of postmodernism, futurism, minimalism and everything in between. The famous Golden Age of Hollywood cinemas also succumbed to religion on Broadway in the city center, for example, the Tower cinema is now an evangelical church.

The newest and most popular tabernacles in Los Angeles include the recently built Cathedral of Our Lady of the Angels, the newlyweds’ popular Wayward Chapel, the Jewish Synagogue and the Mormon Temple in Westwood. The Church of Scientology is also nearby, as is the Muslim Mosque in Culver City.

The others include the temples of the Russian Orthodox Church, colorful Thai prayer houses and Krishna society, including Baptist churches and the like. There is also a Hindu shrine in Malibu. However, it is quite interesting that the architecture of these religious shrines had a great influence on the architecture and design of the local dwellings, which you may not see in Europe.

From the cathedral to the mosque

Cathedral of Our Lady of the Angels is an impressive and unusual building in the city center that minimizes right angles and uses the latest earthquake protection techniques. The building gives the impression of fragmentation, which in the style of deconstructivism is characterized by the absence of obvious harmony, continuity or symmetry.

New and innovative technologies were used here, especially glass, steel and reinforced concrete, with the idea that the form should follow the function of minimalism and the rejection of ornament. The large bronze door, located on the southeast side of the cathedral, was designed by Mexican sculptor Robert Graham, who was born in Los Angeles.

Crystal Cathedral is an Orange County cathedral that was designed as a “religious theater.” To this day, it functions as a television studio and as a stage for gathering 3,000 people. The cathedral was commissioned by renowned television evangelist Robert Schuller and completed in 1980. In the postmodernist style, architects Philip Johnson and John Burgee devised a glass wall in response to Schuller’s request that the church be open to “heaven and the outside world.”

Wayfarers Chapel in Rancho Palos Verdes is known for its unique organic architecture and location on the cliffs above the Pacific Ocean. It was opened in 1951 as the Swedenborgian Church of the Christian Church with an open mind, looking to the future and drawing its faith from the Bible, according to the teachings of Emanuel Swedenborg (1688-1772). The style of modern architecture is the work of architect Lloyd Wright. 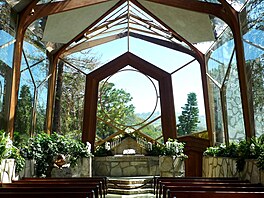 Wayfarers Chapel in Rancho Palos Verdes is known for its unique organic architecture and cliff-top location.

It’s in North Hollywood Theravada. It is the second largest Thai Buddhist temple in the United States and a thriving religious, cultural and social center. The architecture is traditional Thai, Buddhist. The door of the main temple is guarded by two large colored statues of Yaksha.

Temple of a Hindu god Venkateswara was built in 1981. It is located in Calabasas near Malibu in the Santa Monica Mountains. It is owned and operated by the Hindu Temple Society of Southern California. It was built in the style of Hindu temple architecture, which appeared in the southern part of the Indian subcontinent in the sixteenth century.

Sinai Synagogue is a magnificent expression of expressionist design. The building was designed by architect Sidney Eisenshtat, a graduate of USC’s School of Architecture and a student of Frank Lloyd Wright. Eisenshtat is considered one of the leading architects of modern synagogues, academic buildings and Jewish community centers in Southern California. He was an expert in thin-layer concrete structures, which allowed him to create huge interiors with towering roofs and walls. The Sinai Temple was opened for Jewish holidays in September 1960. It occupies an entire block of Wilshire Boulevard in Westwood. 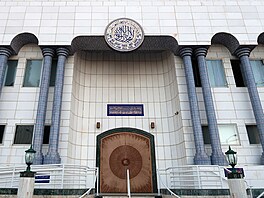 King Fahad Mosque in the style of Islamic architecture is in Culver City.

King Fahad Mosque The style of Islamic architecture is in Culver City. It was opened in 1998. It has a capacity of 2,000 worshipers, a marble facade, hand-made tiles from Turkey and a nearly 25-meter-high minaret topped with a gold leaf crescent.

Alone Church of Scientology was founded relatively recently, in 1954, by science fiction writer L. Ron Hubbard. The main building was designed by architect Claud W. Beelman in a combination of Beaux-Arts and Art Deco styles.

In 1947, architect Bassard designed it for Calgary Baptist Church in Santa Monica a monumental shrine in the style of the American Colonial Revival. It is a reflection of the strength and dedication of their members and their growing influence on city life.

Mormon Church of Jesus Christ of Latter-day Saints last days has a modernist-style temple with an aesthetic that goes back to a selection of Mo-Sai prefabricated concrete cladding, a blend of crushed quartz and white Portland cement mined in Utah and Nevada. The very light brown pigmentation of Mo-Sai has the advantage of hiding a thin layer of soot that accumulates on most Los Angeles buildings. The church is 112 m long, 82 m wide and has a total height of 78 m. At the top of the church stands a 5 m high statue of the angel Moroni. The architect, Edward O. Anderson, modeled Mayan architecture. 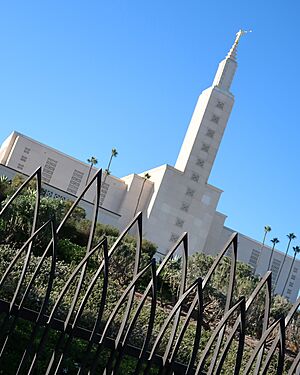 The Mormon Church of Jesus Christ of Latter-day Saints has a modernist-style temple with an aesthetic that goes back to the selection of Mo-Sai prefabricated concrete cladding. At the top of the temple stands a 5 m high statue of the angel Moroni.

In 1994, an earthquake seriously damaged Los Angeles Cathedral Saint Vibiana. In 2002, it was replaced by a new building by Spanish architect Jose Rafael Monea.

Sects will also be satisfied with the facilities in the suite

The various sects must not be forgotten either. It operates mainly in ordinary commercial premises, private villas and suites. They usually have a mayfly life. Thanks to this, they can always disappear at the right moment.

They have crazy ideas. Cults that have influenced new religions in Los Angeles include adherents of alternative philosophy and fanatics of interesting ideas. For example, the movement Mazdaznana moved founder Otoman Zar-Adusht Hanish from Chicago to LA in 1916 It was a “cult of sunshine” who fasted and engaged in “self-torture to drive out the devil.”

HeliosKnown as the cult of love, he was once again a creation of the jazz age of Edith Maida Lessing, who presided over a dilapidated mix of tents and huts in Glassell Park. She called it Mount Helios. Lessing said free love would replace marriage, believed in joint ownership of property, and boasted that she had control over more than a thousand men.

Sekt I am founded by Guy Ballard, during the Great Depression. He claimed that during a hike to Mount Shasta he met a foreigner named St. Germain, who wore a robe adorned with jewels, which gave him the strength to create wealth and energy. He had more than a million devotees and his books on St. Germain became a bestseller. Followers still visit the temple organization in downtown LA 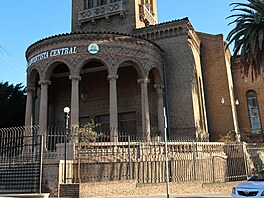 The People Temple was a temple of nations whose followers promoted racial equality and economic justice. In Los Angeles, on the corner of Alvarado and Hoover Streets, they ran a large church. Church founder Jim Jones preached here.

Company Aetherius opened in the 1950s by George King. He claimed that an alien was talking to him in his apartment and sharing transmissions from a stellar space dream team that included both Jesus and Buddha. By establishing his headquarters in Hollywood, he gained supporters and promised to save the world with the “radiation energy” gathered from Mount Baldy.

People Temple was the Temple of Nations, whose followers promoted racial equality and economic justice. The headquarters were in San Francisco, in Los Angeles on the corner of Alvarado and Hoover streets then operated a large church. Church founder Jim Jones preached here. About 150 locals were among those who left California for Guyana in 1978, where 909 people died after drinking a cyanide drink at Jones’s urging.

The monstrous arrest was given new marks, and even so, the young man curled up with his car

Even for Spart, he intervenes in the title game: We are in this dark, Vlkanova admitted

COMMENT: Not securing gas supplies during a war is an incredible gamble

The last African monarchy is restoring the airline after 23 years