Pralines and Alaska have decided. My mother won the nursery competition for the whole country

Jana has won the technical challenge four times, no wonder she is a perfectionist. She went to the finals, saying that she had already won for herself. Lucie took it in a similar way, who did not hesitate to be rewarded for advancing to the finals and bought her dream earrings.

“I don’t understand why I’m here yet. It’s just me, “Martin commented on her progress to the finals very emotionally. Below, for example, you’ll find a recipe for her absolutely great savory quiche.

Martina makes pralines at home and she was literally looking forward to this challenge. She was done before the limit, so she offered her help to Jana, who had just struggled with the right tempering of the chocolate, even though she didn’t have a problem with it at home. She didn’t even have time to finish the box in the competition, while Lucka managed it. You can enjoy the pralines of all three finalists in the photo gallery.

Baked Alaska has plenty of snow and ice cream

According to one legend, a technical challenge in the form of dessert, which according to one legend was created in a restaurant in New York to celebrate Alaska’s accession to the USA, was served at the reception of President Thomas Jefferson in 1802, the contestants had 1 hour and 45 minutes. And all three were absolutely thrilled that they could try making ice cream in an ice cream parlor. 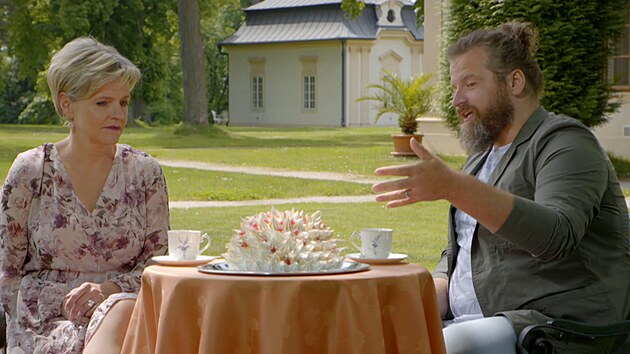 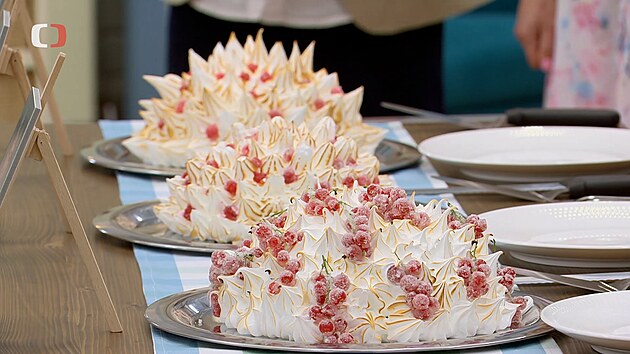 Baked Alaska, a technical challenge selected by Míša Landová. Finished desserts of the finalists on the right.

It was the currant and chocolate ice cream that was supposed to form the filling of this fancy cake, the surface of which is covered with meringue and tanned with a pistol just before serving. Technically, there is really something to spoil about this dessert, the process must be precisely phased. “It’s actually a big snowland in which ice cream or sorbet is hidden,” Josef Maršálek defined the so-called baked Alaska in a succinct way. And the finalists thrilled him and Míša Landová with their performance.

When Josef and Míša, who prepared this challenge for the competitors, had all three Alaskas in front of them during an anonymous evaluation, they looked beautiful and tasted great. And even though the dessert was to be decorated on the surface with only individual currant balls wrapped in sugar, the rebel Martina did so with whole currant grapes. And she didn’t miss it, it looked absolutely amazing.

The antigravity cake did not decide by chance

The next day was followed by a creative challenge, which is usually, or used to be, decisive, but the finals should not be so balanced.

Creating a forty-inch-tall cake in the hot summer is not easy, so the bar was high, but Jana, Martin and Lucie were not really afraid of it. But Jana’s nervousness and desire for perfection worked, which didn’t go hand in hand with the time limit. Lucie again chose “only” the golden mean and bet on safety. And Martina also met the conditions of the challenge, but the jurors would have been able to imagine a few things differently for her cake as well.

The creative challenge therefore ended in a draw, and the jurors had to take into account in the final verdict how each finalist did pralines and roasted Alaska.

Martina did not expect an overall victory.

Martin was probably really surprised by the announcement of the winner, because she didn’t expect her name to be heard at all. “I’m absorbing it,” she said after the announcement with tears of happiness in her eyes. “I think Martina is exceptional in that she went into it humanly and didn’t play anything. And she overcame herself, “commented confectioner Josef Maršálek. And Míša Landová wished her that she would continue to enjoy baking as much as she had enjoyed so far. Because she loved to show baking in the competition.

The recipe for salty quiche according to Martina

The preparation will take you about 1.5 hours, but according to the jurors Baked the whole country, the result is definitely worth it. For the dough you need 250 g of plain flour, 125 g + 5 g of butter, 10 g of Himalayan salt and 8 tablespoons of tap water.

Martina used figs in the quiche, among other things, and decorated it nicely, and the jury was visually and tastefully enthusiastic. | photo: Czech Television

From the butter, flour and salt, we create a crumb, to which we gradually add water until a smooth dough is formed. Roll out the dough and transfer to a butter-erased mold. We clean the edges, pierce with a fork. To prevent the dough from blowing, we load it with baking paper and put any legume on it. Pre-bake at 200 ° C for about 10 minutes. We will let it cool down.

Fry the onion in a pan with a little oil and add the bacon, as soon as the bacon is crispy, set aside. Meanwhile, beat the eggs in the bowl with salt, pepper, cream (sour and whipped), cheese and add the bacon and onion.

Pour the filling into a mold with pre-baked dough, which we smeared with cranberry jam. Put cheese, nuts and figs. Bake in the oven for 30 minutes at 180 ° C until the surface is golden. Cool and serve the baked cake. For example, on crumpled baking paper with cherry tomatoes and smooth parsley like Martina.

Hzenkky Mostu finished the interleague in the second place behind Michalovce

After ten years, Cheb will become a skate park, grow at picnic grills

Friendship above all else. Finding friends is easy, just be open