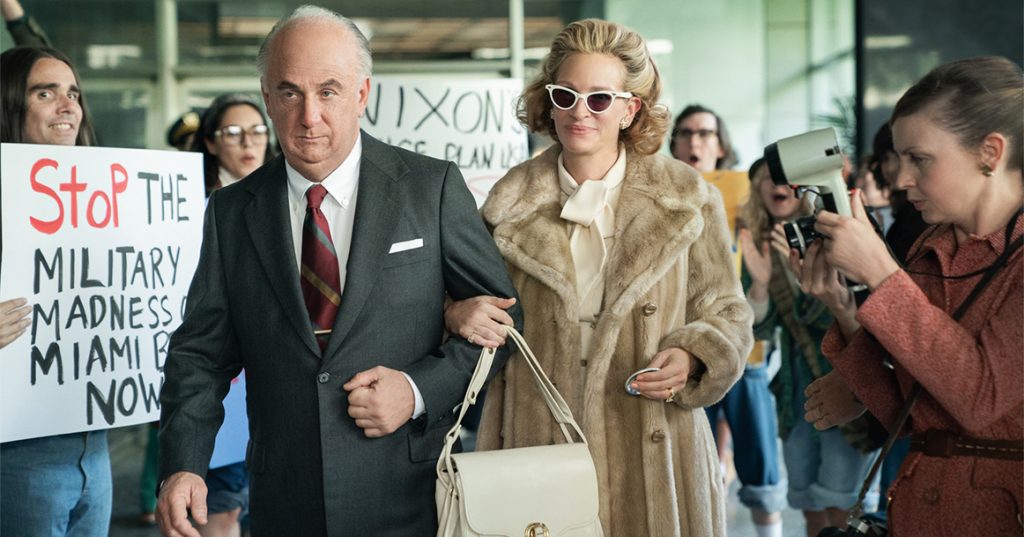 This year, the fiftieth anniversary is celebrated not only by The Godfather, but also by the famous Watergate scandal, which put an end to Richard Nixon’s presidential career.

After the premiere of Coppola’s film, journalists compared the behavior of on-screen mafiosi with the methods of the Nixon circle, so the latest case of this presidential team has long been waiting for a film incarnation in the genre of an adventurous and sarcastic series. It is in this format that “Gazlit” was made – the brainchild of one of the screenwriters of “Mr. Robot” Robbie Pickering. For the first truly big project, the aspiring showrunner enlisted the production support of former patron Sam Esmail (“Mr. Robot”, “Homecoming”) – this is how the project, presumably, got a whole scattering of stars of the first magnitude. Julia Roberts became the central figure – it was she who played Martha Mitchell, the wife of the US Attorney General and part-time head of Nixon’s campaign headquarters.

It was in his office that the idea came up to stuff the Watergate Hotel, where the campaign headquarters of Democratic candidate George McGovern was located, with bugs. The sabotage operation was the figment of the fantasy of ex-FBI agent George Gordon Liddy – in “Gaslit” he is played by Shay Whigham, transformed into a manic mustachioed man with a portrait of Hitler in the red corner of his apartment. The plan, called “The Jewel,” included not only wiretapping, but interception of communications and the participation of recruited sex workers of Cuban origin. For the most part, none of this came to fruition, watergate became a household word, and in hot pursuit, Alan Pakula made the great film All the President’s Men.

In the series, the focus is shifted from well-known events to their background. Therefore, on the one hand, this is a comedy in the spirit of the Coen brothers and Adam McKay: high-ranking idiots with burning eyes make one mistake after another, making the viewer wonder how such cretins even ended up in high offices. In addition to Liddy, there is deputy campaign director Jeb Magruder (Hamish Linklater), and adviser John Dean (Dan Stevens), who almost accidentally fell into the mix, and another delusional conservative warrior James McCord (Chris Bauer). Rising above all this is the massive figure of John Mitchell, a real political shark, a man whose seeming softness is due only to the fact that shooting at an opponent at the moment is ineffective. Mitchell is one of the main attractions of the series, as he is played by Sean Penn, who is completely unrecognizable. Moreover, this is not a demonstrative trick, as in “Power” or “Darkest Hours”, namely reincarnation – Penn here shows that he is able to absolutely merge with the proposed makeup without losing great acting qualities. Director Matt Ross (Captain Fantastic), who directed all eight episodes of Gaslit, is also responsible for the acting class.

If John Mitchell is responsible for the nerve-wracking threat in the midst of a hilarious farce, then his wife Martha, played by Roberts, is responsible for the drama. For her, the unrighteous activity of her husband is not only a civil, but also a very personal trauma. Her attempt to release classified information about the Nixon headquarters is a reaction to her husband’s lie, in which the pain of the offended woman spreads into the political space. Martha becomes truly dangerous for her husband – the series here takes on an alarming thriller tone. More important, however, is that the story about Watergate, from Martha’s point of view, ceases to be a cheerful “liberal agitation”, acquires an unexpected human dimension and thus refreshes the legendary plot.

And it’s all the more interesting how something similar will succeed in another series about the same events – HBO’s White House Plumbers with Woody Harrelson, which is also announced for this year.

Jin’s spectacular video that has gone viral on social media

Overheard in Moscow: what did you talk about this week

The unexpected return of Willy Wonka, you will be surprised by his new adaptation