How do they present the war to the Russians? The fake in Buč and cheerful sailors from the Moscow cruiser 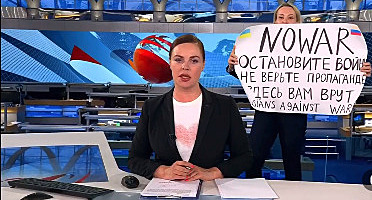 Already in early March, Vladimir Putin signed a media law. He criminalizes all objective reporting on the war in Ukraine. In response, many independent media were forced to close and more than 150 local journalists allegedly went into exile. The independent newspaper Novaya Gazeta even announced that it would stop publishing until the end of the war.

The Russians thus have no access to any source of independent information. While the Russian invasion of Ukraine presents a series of brutal attacks and strategic mistakes by the Russian army to Western audiences, Russian television presents the same events as the positive development of Ukraine’s denazification. Daily The New York Times he selected several such cases from fifty hours of television footage.

Russia suffered a significant loss in mid-April when Ukrainian forces hit the flagship missile cruiser Moscow. Ukrainian officials said at the time that the ship was hit by two anti-ship missiles Neptune.

However, the Russian state-controlled media downplayed the whole situation. First, the Russian Ministry of Defense said the ship was damaged after ammunition exploded on board. “The ship was towed back to shore and the crew was safely evacuated,” the report continued.

Russian media later reported that the ship sank during the storm. There were also footage on television of healthy Russian soldiers, which the Russian media described as the crew of the Moscow ship, alive and well.

Russian narrative on the number of victims

The high number of fallen or captured Russian soldiers is another problem of the Kremlin, which spoils its efforts to create a positive impression of the war in Russia. Ukrainian numbers of destroyed invading forces have repeatedly been rejected by Russian news media. However, ignoring the victims from one’s own ranks is much more difficult due to the grieving families of the fallen. Only in a few cases in the Russian media appeared numbers of losses corresponding to the data published by the Ukrainian sideshortly after publication but deleted.

It was not until March that Russia admitted the total number of victims for the first time. However, according to American experts, the Russians also greatly underestimated these reports. Although it is difficult to obtain accurate data on the number of casualties during the war, Western intelligence agencies estimate that Russia’s military casualties could reach as many as 10,000 dead and 30,000 wounded.

According to the Russians, the Buč massacre is a hoax

Soon after Russian forces withdrew from the area around Kiev, images of the bodies of dead civilians lying in the streets appeared. Some civilians lay in the streets with their hands tied or gunshot wounds to their heads.

However, this finding was described as a fraud on Russian television. Television presenters have begun to analyze images and videos for signs of counterfeiting. Many at the time noted that the clothes of some dead civilians were too clean to be on the streets for several days and could not be killed during the Russian occupation.

A statement from the Ministry of Defense, which was broadcast on the nightly news program “Vremja”, stated that there was no sign of decay on the bodies. “All this is irrefutable proof that the photographs and videos from Buč are another production of the Kiev regime in favor of the Western mass media,” the statement said.

However, this information was later denied by Russia itself under the weight of evidence. His second option was that the civilians were indeed dead, but that they were not killed by Russian soldiers, but by Ukrainian ones. The Russian state television station even supported this thesis with its own alternative timeline. She chose shots for her audience to prove the killing of civilians a few days after the departure of Russian troops.

Russia received international condemnation after the Russian army bombed a maternity hospital in the port city of Mariupol. The footage of injured pregnant women carried by doctors across the charred hospital grounds or carried down the damaged stairs clearly showed the Western world civilian victims of the war.

The Kremlin could not keep such strong shots. That’s why he released them on television, but he adjusted them to his image. He used pictures of two women whose faces were widely featured in the Western media in connection with the Mariupol hospital.

One of them, Influenza Marianna Vyšímirská, survived the attack and later gave birth to a baby girl. The second woman, who could not be identified, died. However, Russian moderators claimed that she was one and the same woman, who wanted to silence Vyshirska as a direct witness. However, Vyshirir denied that she was the woman they carried dead on a stretcher.

In another segment broadcast by Russian television, the moderator described the victims from the hospital as soldiers of the Ukrainian far-right battalion Azov. Footage taken by Western journalists showed that some of the victims wore khaki-colored clothing that vaguely resembled military uniforms.

In early March, Russian forces advanced on Europe’s largest nuclear power plant. The skirmish with Ukrainian forces ended in a fire on the premises, which was later extinguished. Ukrainian officials have accused Russia of “nuclear terrorism”.

However, a different version was communicated to the Russian audience. According to that, the Ukrainian soldiers were to attack the facility themselves and set the building on fire before fleeing. According to a government statement quoted by the moderators in the state media, Russian forces defended the building from “Ukrainian saboteurs”.

In the footage published a few weeks later, the power plant was in normal operation. Drone footage even showed workers coming to undamaged equipment and undergoing security checks in an orderly manner.

“While a special military operation is taking place, the nuclear power plant has not stopped working for a second,” said Alexei Ivanov, an evening news reporter for Vremya. Ivanov also told Russian viewers that the Russian guards “did not interfere in the work of the power plant.” One of the soldiers who gave an interview inside the power plant said that “the employees of this plant show a certain respect” and “maintain order and discipline at work”.

The idea that Ukraine is doing better under Russian control is still a frequent claim by state television. This reinforces Putin’s argument that Russian troops were sent to Ukraine to protect Ukrainian citizens.