Exactly 65 years ago, the construction of Khrushchev began 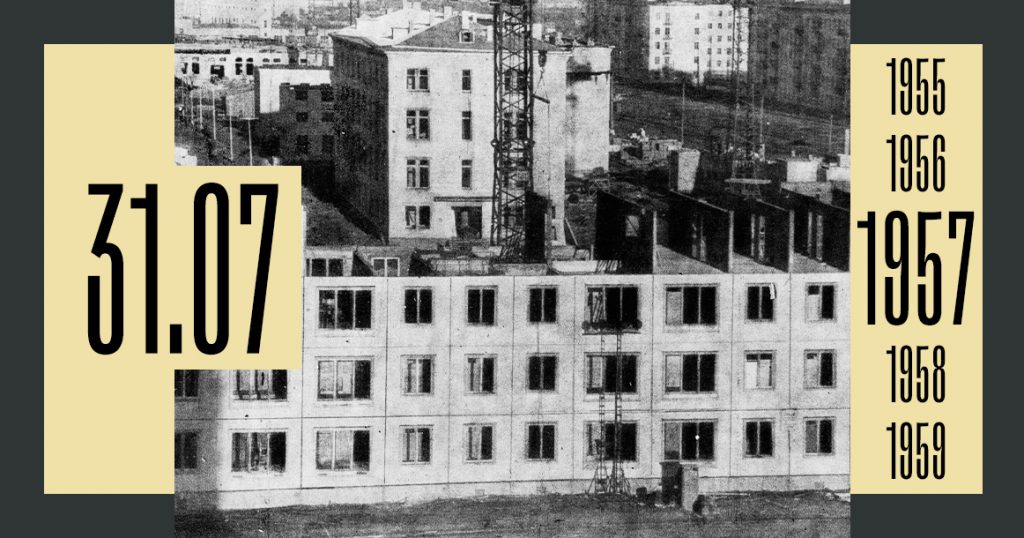 The Great Patriotic War, which destroyed 70 million square meters. meters of housing, left behind a catastrophe of the housing stock of the USSR.

Mass construction began immediately after the victory. By 1952, more than 78 million residential “squares” had been commissioned in the cities and, in fact, all losses had been restored.

But this did not help the situation. The housing crisis was superimposed on the rapid growth of cities. If in 1917 only 17% of the country’s population lived in cities, then in 1956 – already about 50%. The famous Stalinist Empire style suggested that the housing of a Soviet person should be beautiful and comfortable. This, of course, was good, but under the Stalinist Construction Norms and Rules (SNiP), one building was built over the years for amounts that could build a small city. Khrushchev began by decisively “eliminating excesses” in architecture in 1955.

For the construction industry, this was tantamount to a revolution. From the 1930s, the architects of the USSR were part of the ideological project of building a new society and exercised in the grandeur of buildings. This made Soviet architecture unique and completely knocked it out of the global trends for functionality and simplicity. After the Khrushchev declarations, the ideologically correct sheaves had to be cut and the collective farmers removed from the cornices. Around the same time, the entire industry was reoriented from brick and reinforced concrete panels to steel frames that were poured with concrete. And on July 31, 1957, a new housing construction strategy was adopted, whose slogan was “easier, cheaper, faster, more affordable.”

The first panel Khrushchev was built in Moscow in the same year at st. Grimau, 16. These are the same New Cheryomushki in the South-West of the capital, which will later appear in almost all cities of the USSR. An experimental 9th ​​quarter was built there, where new industrial technologies were first applied. There were no frills, except for the tiles on the facade, there were no more. All footage has been reduced to a minimum. Propaganda of that time was fascinating to say that in old houses for cooking borscht, the hostess must walk 500 steps, and in new ones she can easily reach everything she needs with her hand. Translated into the language of SNiPs, this meant that the kitchen area was 5 square meters. meters. The total area of ​​a two-room apartment is 44.4 sq. meters. Ceilings fell from 3 meters to 2.5 meters. At first, the Khrushchevs were designed on four floors, but then they stopped at five. Doctors forbade building higher – after all, there were no elevators, like garbage chutes, in the houses either. Due to the paucity of decor, architects excelled in arranging quarters. So, in front of the first Khrushchev in the USSR, a modest but elegant fountain was arranged on Grimau, which still works today.

Building technology was so advanced that one house was assembled in just 12 days. It took another two weeks to finish the interior. Considering that more than 60% of the then townspeople huddled in communal apartments, one can imagine with what delight they drove into separate apartments. People literally kissed the walls of Khrushchev.

As a result, builders have achieved unprecedented efficiency. The cost of residential meters has decreased by 30 percent or more. All urban planning strategies have changed radically. Following the example of the West, in the USSR they began to calculate the time of walking distance to all socially necessary objects and directly model the life of microdistricts. The city was no longer perceived as a place of life for the elite. Now it has become common to all. Khrushchev’s building reform literally regenerated the USSR. After 1956, the country became the world leader in construction rates. In just seven years, from 1956 to 1963, the housing stock in the USSR doubled. Every fourth family received a separate apartment.

And house number 16 on Grimau Street is still standing. It looks simple but very comfortable.

What does a long downtime lead to: plants appeared on the entire facade of the Udarnik cinema

A short distance from the title. Junior cross-country skiers won silver at the World Championships in Denmark

The end of the first hockey memory: Petr Nedvd gave the ball to the fans