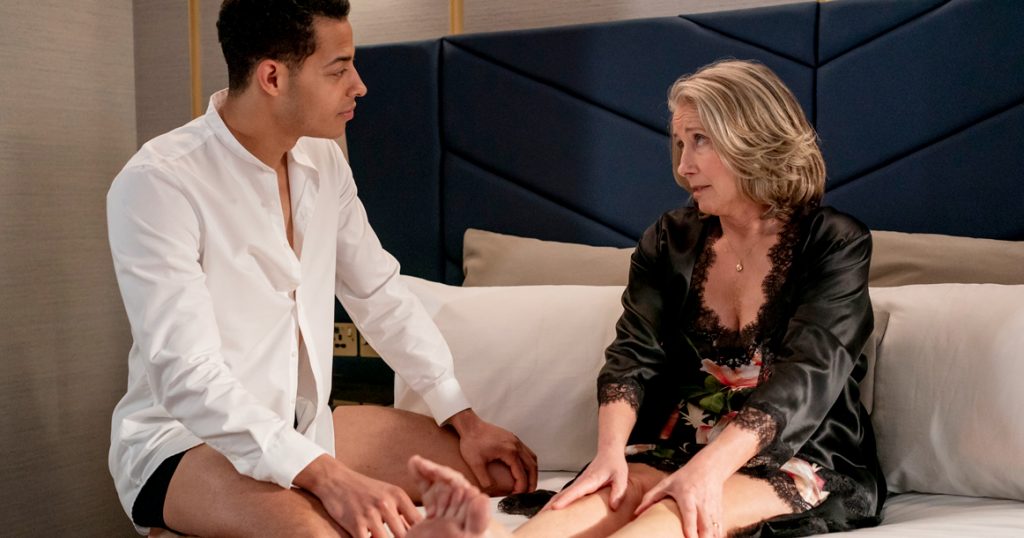 There are three ways to make a film about a 55-year-old teacher who, after the death of her husband, hires a young gigolo to finally have an orgasm.

It could be a light sex sitcom where generational differences are juxtaposed to carve out the humor. Or a drama in the spirit of Mrs. Stone’s Roman Spring by Tennessee Williams, showing the futility of old-fashioned social notions of morality and their harm to a truly free person. Screenwriter Kathy Brand and director Sophie Hyde, apparently tired of the way men show the sexuality of women of a certain age on the screen, took the third path – combining light comedy with serious drama with a strong twist in the latter. Such a fusion is rarely successful, but “Love on Call” (in the original – “Good Luck To You, Leo Grande”, the film appeared on the Hulu video service on June 17) has its pluses.

– Emma Thompson (actually an actress of 63) does not need to prove anything for a long time, but the degree of her frankness – both emotional and physical – is amazing here. Her character Nancy Stokes, who endured sex in a missionary position with her husband for 31 years, at the very beginning of the film prepares for the first date with the gigolo Leo (Daryl McCormack) even more carefully than he does. The role of Nancy, locked in her body as in a cage at the beginning of the film, allows Thompson to disperse to the full range of acting possibilities. On the one hand, the shy widow is determined to experience an orgasm at least once in her life – the chances of experiencing it again at her age are almost zero (she believes). On the other hand, in her lack of experience, Nancy looks helplessly at the zipper of Leo’s pants before blowjob and asks, “What, should I unzip it?” In general, Thompson here, following her heroine, smears on the screen across the entire dramatic spectrum, and it is a pleasure to watch this mature, fearless work;

– this is a movie for two characters, and any young actor in the role of a gigolo who has to work on an equal footing with Thompson loses a priori. Only not Daryl McCormack, who tonally withstands this fight with a much more experienced partner, never once out of tune;

– a film about the sexual liberation of a representative of the generation over 50 suddenly turns into the re-education of an old fart. Nancy has ideas about prostitution in her head from the last century, and not even the end of it. Instead of just throwing the handsome Leo on the bed, the teacher suddenly starts asking him about the problems that “brought him to such a life.” But Leo is fine, he is not only prostituting because he needs money. For him, prostitution is just another job, he provides services, and does not “roll down.” In this sense, a shocked Nancy gets much more from Leo than sex – he returns her to the modern world from the closed one where she has lived until now. In addition, Leo has a quite decent education – he impresses the teacher with the knowledge of the words “empirical” and “ambivalent”. How can a poor woman, whose children have long grown up and started their own lives, not succumb to maternal instinct;

– the funniest thing begins when the age of Nancy and Leo begins to give out specific words. “What frivolous behavior,” boomer girl Nancy says. Frivolous, my grandmother used to say, buzzer Leo chuckles. “Let’s not talk about your grandmother,” Nancy pleads, remembering why they are in this hotel room;

is a film not so much about the absence of an orgasm as about missed opportunities in life, about the fact that what seemed important 30 years ago turns out to be nonsense, and life in any case will not work out as planned. In this case, the younger generation teaches the older one to stop being ashamed of their body, that is, to stop being ashamed of what is natural in general. This is the message of the film, and he has absolutely nothing to object to, and he doesn’t want to.

– in places the film, like its heroine, is depressingly naive. It seems that Nancy is not 55, but at least 70, so her ideas about sex and experience do not correspond to the experience and upbringing of her peers. Nancy was young in the 1980s and 1990s, not in the 1950s, judging by her age, and the complete absence of a sexual life before or after marriage has long been considered a virtue in her generation. Therefore, her fear of sex in the film does not look like a virtue, but like an anomaly. It’s the only fake aspect in the movie that has a lot more to say about sex than 99% of Hollywood movies.

The Anastasia Makeeva Roman Malkov with his son 2022

Stops with swings for adults will be made near Skhodnenskaya