On Wednesday, December 29, in a statement with CNN, Dwayne johnson, also known as “La Roca”, has responded to the invitation of Vin Diesel on Instagram returning to Fast and Furious for the tenth and final in the franchise.

“My little brother Dwayne… the time has come… The world awaits the end of Fast 10. As you know, my children refer to you as Uncle Dwayne in my house. There is not a holiday that passes that they and you do not send good wishes … but the time has come. Legacy awaits. Years ago I told you that I was going to keep my promise to Pablo. I swore that we would reach and manifest the best Fast in the final which is 10! I say this out of love … but you must introduce yourself, do not leave the franchise inactive, you have a very important role to play. Hobbs cannot be played by anyone else. I hope you are up to the occasion. and fulfill your destinyHe wrote on his Instagram account. 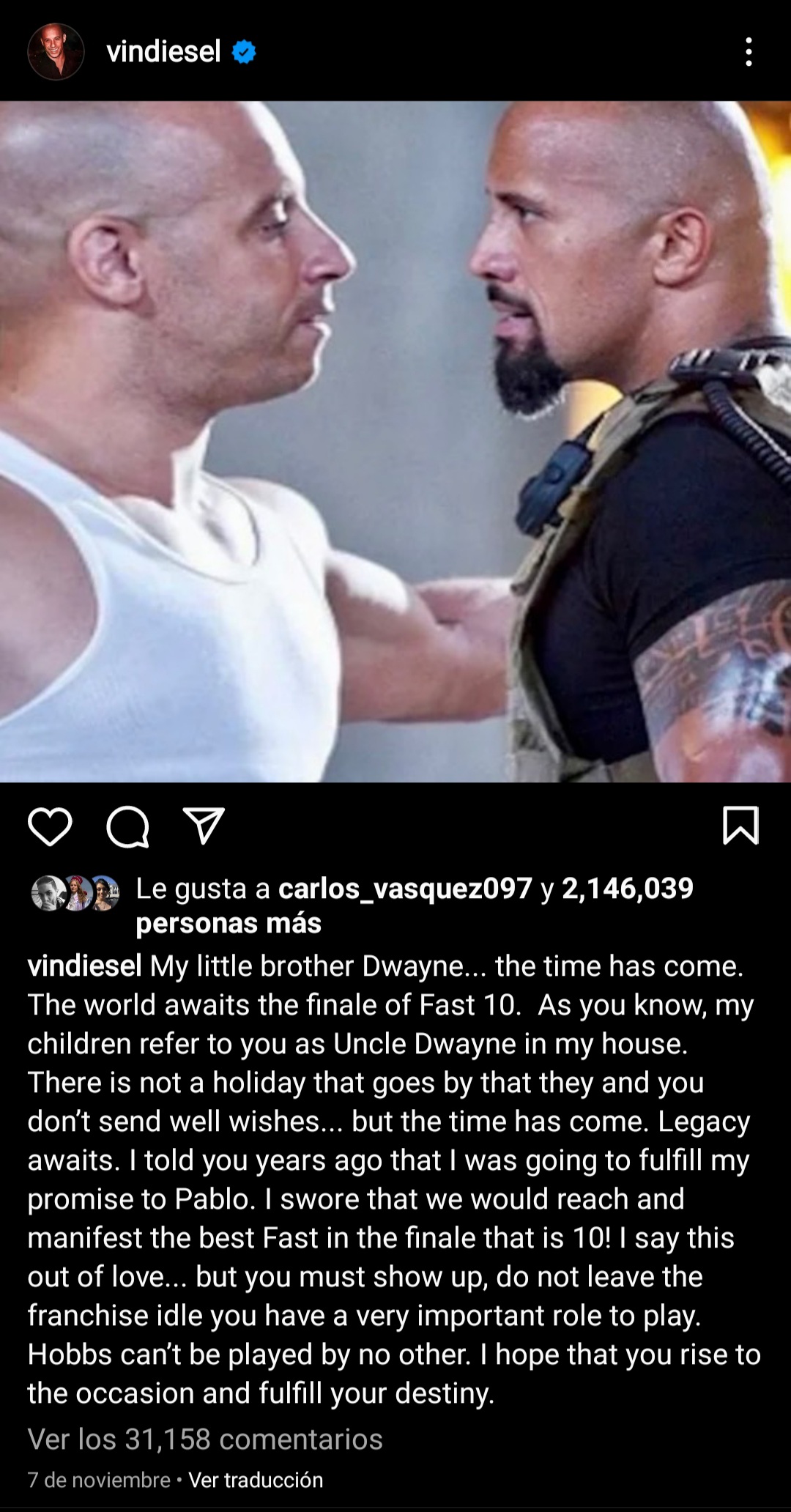 The website asked Johnson, who has been part of the franchise since Fast and Furious: 5in Control 2011, if you were surprised by Diesel’s post asking him to “perform” to Fast and furious 10.

“I was very surprised by Vin’s recent post. Last June, when Vin and I didn’t connect through social media, I told him directly and privately that I would not be returning to the franchise. I was firm but cordial with my words and I said that I would always support him from the cast. and always supported by the franchise to be successful, but that there was no chance that he would return. I spoke privately with my Universal partners as well, all of whom were very supportive as they understood the issue.“.

“Vin’s recent public post was an example of his manipulation. I did not like that he raised his children in the publication, as well as the death of Paul Walker. Leave them out of this. We had talked about this months ago and I reached My Goal. From the beginning it was the end of my incredible journey with this incredible ‘Fast and Furious’ franchise with gratitude and grace“.

“It’s too bad this public dialogue has muddied the waters … I wish my former co-stars and crew members the best of luck and success in the next chapter.“.

Dwayne Johnson has turned down Vin Diesel’s invitation to return for Fast & Furious 10: “I told [Diesel] directly that I would not be returning to the franchise. Vin’s recent public post was an example of his manipulation. “

Narcolepsy, the neurological disorder that is affecting the marriage of Camilo and Evaluna