Colorado dams are drying up, corpses and a lost national park are emerging 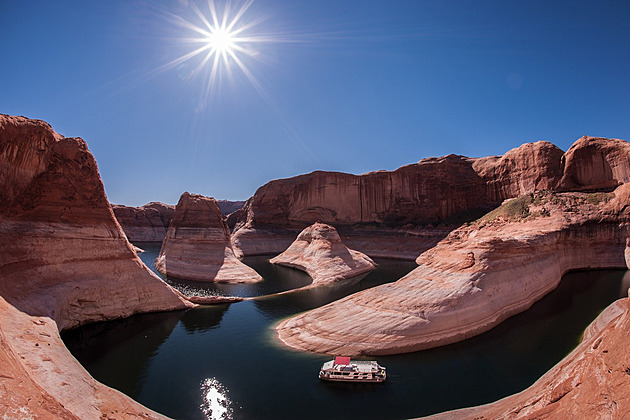 Lake Mead is the largest dam in the United States and one of the largest in the world. It is located about 48 kilometers southeast of Las Vegas. It supplies drinking water to millions of people, in addition to Las Vegas and Los Angeles. It was established in 1935. The level here has been declining since 2000, but in recent years the pace has been faster. This year, the water level is the lowest since the dam was filled. According to scientists, the climate crisis is exacerbating the situation.

According to investigators, the body that the paddlers found at the site in early May belonged to the victims of the shooting from the 1970s or 1980s. Detective Ray Spencer told the local media that this conclusion was based on the victim’s clothes and shoes, as they were sold in the Kmart chain at the time. An as yet unidentified body was found on May 1 in a corroded barrel stuck in mud.

Former Las Vegas Mayor Oscar Goodman, who once represented the mobsters as a lawyer, said according to the AP that it is impossible to estimate what is at the bottom of the dam. “It’s not a bad place to throw a body,” he said. He did not say whose remains the water could wash away. He said of the body, “I’m pretty sure it wasn’t Jimmy Hoff.”

Hoff’s powerful union leader was last seen on July 30, 1975 in front of a restaurant in Detroit. His disappearance is a mystery that occasionally forces the FBI to search for his body. Goodman noted that many of his former clients are interested in “climate control,” which in the Mafia Dictionary means ensuring that dam levels do not fall and bodies remain in their water graves.

“It’s going to be a very difficult case,” Detective Spencer told CBS News after finding the first body. “I think we will probably find more human remains due to the drop in water levels,” he added.

His forecast turned out to be accurate over the weekend. On Saturday, two sisters found human bones during paddleboarding. One of them then told CBS that she first considered the finding to be the bones of a bighorn sheep. However, when she found the jaw, she realized with horror that they were human remains. Las Vegas police currently have no suspicion that the second death was caused by someone else’s fault. However, he intends to investigate the case to clarify whether it was a murder or a suspected death.

A flooded canyon that could have been a US treasure

The level of Lake Powell, a dam located higher upstream on the Colorado border between southern Utah and northern Arizona, is also falling. Here (yet) no corpses come to light, but the walls of a mysterious valley known as Glen Canyon.

Just returned from our first field trip of the year to see what’s happening in the canyons! Here we have Forgotten Canyon from bottom to top (a thread) Like most canyons, in the bottom (dead zone), we see a ghost cottonwood forest and sediment flats https://t.co/Z7VXctarsi

The 273-kilometer-long canyon was flooded after the dam was completed in 1963. At that time, the intricate maze of remarkable rock formations and valuable ecosystems disappeared underwater. That’s why Glen Canyon, which used to be a remote core of the Utah wilderness, is referred to as a “lost national park.”

If he was here, he could be the link between the Capitol Reef, Arches, and Canyonlands parks to the north, and the Grand Canyon, which Colorado cuts southwest from here. Instead, there is now a recreation area and in the adjacent area there is “only” the Grand Staircase-Escalante reservation.

Environmentalists have been working for years to have the dam drained, replacing the Mead Reservoir in its place and returning the valley to its former form. However, in addition to the need for water supply, the lobby of the tourist industry in the area also prevents this. Today, boats full of visitors are chasing the vast surface of the reservoir in the middle of the red-hot orange desert.

The California, Nevada and Arizona authorities have agreed at the end of last year to try to increase water volume in Lake Mead through water conservation and other measures. However, the bright ring of rocks that emerges around the perimeter of both reservoirs continues to intensify. It is thus possible that climate change will eventually “solve” the Glen Canyon problem for the people.

After all, the organizers of sightseeing cruises are already beginning to understand the situation. At Lake Powell, they are now attracting tourists to explore the exposed corners of the canyon, which no one has been able to see for more than half a century.

Passengers return to the bus slowly, we are happy to choose a shared bike

Most tried to find a company to repair Repre again, for the first time the price discouraged him

In a week we drove 3,381 km with an electric car. Does it still cost you little?