He reaches under the instrument panel in front of the front passenger with an experienced touch to unlock the bonnet. “Older ones opened differently than newer ones,” he comments. “This one is from Vrchlabí, there are over fifty thousand of Kvasiny,” he will instruct me after looking at VIN.

Then praise the state. “It’s nicely done.” “It’s not renovated, it’s original,” I say. “But the ancestor is new,” he can’t. “This hood was made after 1983,” and points to longitudinal struts from below. “The older ones had them in the cross. Like the forehead, it is also new, it can be recognized by the number of vents. ”There are many lovers and true connoisseurs of old Škoda cars in the Czech Republic. This party is said to collect “vinka”, registration numbers “géelesek”. It was the flagship of the Škoda 742 series. Just a “quill” (that’s what the great crashers were called at the time), which they dreamed of in the nights before Mototechna.

At the veteran hundredth rally around seven castles from Prague’s Ruzyně on the western road to Litoměřice in northern Bohemia and back, our green GLS, borrowed from the Škoda Museum’s depository, stomped like clockwork. The car with a range of just over 60,000 kilometers worked without a hitch. The engine started at the first rumble, no need to choke on a warm day. He liked it best between two and three thousand revolutions. Only the starts were a little rough – the flap in the carburetor had a little play, which the cable that controls it had to “define”; everything was fine under the gas. That was the only imperfection the driver had to get used to.

Even the infamous monstrous cooling system with almost 12 liters of fridex worked without hesitation on a warm spring day. Driving and shifting require concentration, as was usual in cars in the 1970s. There is no thought that the driver would start climbing in the sunshine behind the wheel for lack of stimulus. And it also takes a bit of experience, then you just throw your ass at the exit of the turn and just for fun.

Many swear at the “hundreds”, but those who like to remember them know that when the car was in good condition, the ride could give real joy. The specific architecture with the engine on the rear driven axle gives it phenomenal driving behavior. He can keep up with much stronger and more modern front-wheelers in corners – when the driver feels the car’s behavior and can work with mass transfer, he is incredibly fast in them; true, on the plane, fifty-five horses quickly lose their breath. We dared somewhere to one hundred and twenty, but according to the papers, the “géeleso” is supposed to know one hundred and fifty.

The “stodvácy” cabin is notorious. Mechanical alarm clocks have their own charm, as do subtle everything, as well as columns that make them look great. Everything is thin-walled, but the materials look such a soothing old-fashioned way. The leatherette on the door is a classic, the plush something on the seats resembles a seat in my grandmother’s living room. Everything the navigator needed slammed into the folding box, the driver’s properties taking up a pocket in the surcharge radio panel. 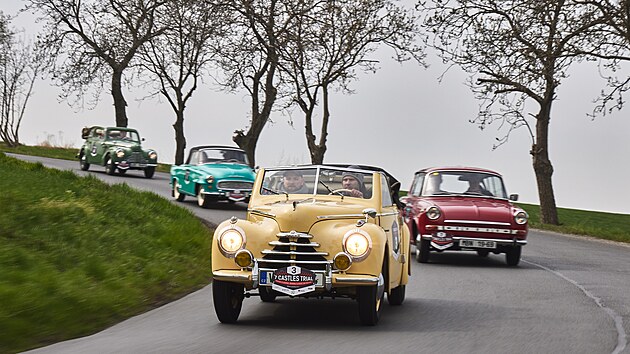 The Škoda 1101 Roadster leads a flock of Škoda cars at the hundredth rally of veterans and youngtimers of the 7 Castles Trial.

The ensigns in the back seats of our green race racetrack appreciated that the museum car didn’t have seat belts, so they weren’t pinned to the seats, they looked out the windows, they knelt here and the monkeys turned the other windows onto the other drivers. The journey then goes even happier.

And how did it all turn out? “Our” Vrchlabí Škoda, which occupied the 240-kilometer rally through the Central Bohemian and Ústí nad Labem regions, overcame all the pitfalls of accuracy tests, found all locations with control stamps, did not surprise secret regularity tests and finished in eleventh place out of seventy starters; This is I think our editorial is the best location. In the extra rated Škoda category, we finished third at the 7 Castles Trial and were the best of the team from the factory museum.

Wenceslas Square received a fountain, water for children and adults

The truck broke through the D1 barriers and swept the cars in the opposite direction, two people died