Adidas came across an ad for bras. We show the diversity, the company defends itself

Adidas’ visual consisted of twenty photographs composed in a grid, which in different sections showed different types and sizes of breasts of women of different ethnicities, ages and weights. The film was accompanied by the slogan: “We believe that women’s breasts of all shapes and sizes deserve protection and comfort. That’s why many of our sports bras have 43 different cuts for every woman to choose from. ”

In addition to the Twitter campaign, Adidas used a similar motif on two outdoor areas. There, 62 and 64 cut-outs of the exposed female bust appeared in the composite photograph. The campaign was accompanied by the slogan: “These are the reasons why we did not produce only one sports bra.”

The British Advertising Standards Board (ASA) received twenty-four complaints soon after the tweet was published. Twitter also stated that the post was reported by the users themselves and to him, but did not violate the rules for posts, according to the company.

As for the billboards, the office was most bothered by the fact that the children could see the picture. “We agreed that the outdoor visuals lacked adequate targeting and were likely to provoke outrage,” the office added. 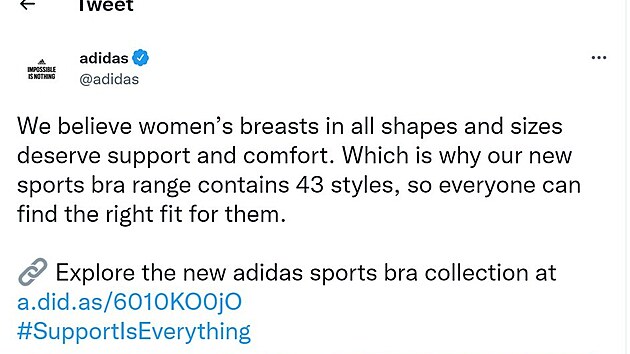 “We believe that women’s breasts of all shapes and sizes deserve protection and comfort,” the company defends its controversial visual. (May 11, 2022)

“We noticed that the main motif of the visual is the emphasis on women’s breasts, which are only covered by the accompanying text of the slogan,” ASA said in its conclusions on the Adidas advertisement. “The ad shows explicit nudity, and the use of such a visual is beyond the scope of commonly published content. It may also affect some recipients, “the office added.

ASA has concluded that it must no longer appear on social networks or outdoors in the form in which complaints have been received. Furthermore, the Office for Advertising Standards recommended that the company target its advertising messages better and more responsibly next time.

Breasts are different, the company claims

“We realized the advertisement with the intention of showing how different breasts can be, so the pictures show many of their shapes, shapes and sizes. The visual is to show that the correct cut of underwear is therefore very important, “the company responded through its spokesman to the office’s criticisms.

According to Adidas, the advertising message was aimed primarily at reflecting on and celebrating the various shapes of a woman’s bust, while in no way emphasizing sexuality. “In addition, the individual images were created with great emphasis on the anonymity of the models so that they would not be in any danger,” added the brand’s spokesman.

“All the models we selected participated in the campaign voluntarily and supported us in our intention,” the company added. Adidas only wanted to show her breasts as part of a woman’s body.

In justification of its intention, the company further explained that the campaign was approved by its audit committee before publication. She subsequently stated that she certainly did not have any sexual subtext or objectification of women. However, she mentioned that the use of nudity in advertising always carries risks, especially when, for example, in the case of outdoor, it lacks targeting. Based on this warning, it did not direct outdoor advertising to schools or church buildings.

“As a company, we definitely stand by our message, because every athlete deserves support,” the spokesman added. According to him, the company continues to tirelessly innovate each of its products in order to get as many people as possible to physical activities and everything they bring with them.

The unique Rogner Bad Blumau impresses with its sophistication

MS Hockey The Austrians embarrassed the Czechs. It’s a miracle we’re here at all, the shooter pointed out